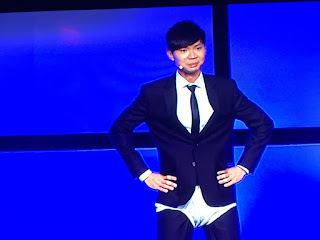 I mentioned on Facebook that I would 'be writing a blogpost about the World Championship' - even though I haven't blogged, apparently, since April. A few people actually asked me to tell them when I posted it. Therefore, I better write it.

First - a couple of caveats:
1. I did not coach, nor did I even know, any of the Finalists this year.
2. I did compete, but took 2nd at District. For the first time ever.
3. I have competed in the Semi's eight times, the finals twice, taking third in 2006.

All finalists are great speakers. All went through the wringer to get there. All gave excellent presentations, and were worthy of being there.

Judged anonymously by relative amateurs of varying experience and personal speaking ability (some world-class, others working-class, and occasionally, other should-go-back-to-class), the contestants face bias and subjectivity, combined with the unknown factors of who their judges are demographically and ideologically, and it can feel like an impossible task. 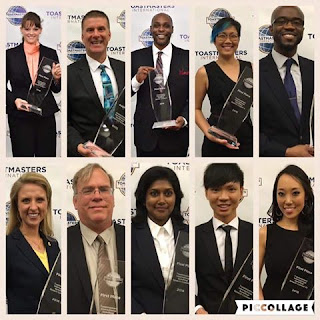 Populated with mostly amateur speakers of the same varying experience and personal speaking ability, judges are armed with a sheet of objectives the speaker must meet, and then emotionally sort through speeches about dead relatives, terminal diseases, terrible hardship, mixed in with the occasional ego trip followed by the grand victory, occasionally peppered with a nod to mom/grandma/great uncle twice-removed for teaching them right. It also features gimmickry - standing on chairs, props, falling down on stage, and, oh, so much more. Even so, the higher the level, the better the speeches, and for the judges, it can feel like an impossible task.

I know this sounds a bit pejorative and sarcastic, but it's truth. The playing field is pretty even for all - so no unfairness is implied. Themes of the human condition are used because they reach the most people. Tony Robbins often says 'success leaves clues' - and the speech contest is full of detectives picking up on what has worked before, so we, more often than not, get served the same messages, in very similar packages, despite the vast diversity of speakers delivering them.

The 2016 World Championship of Public Speaking surely was an impossible task - to compete in, and to judge. It showed all that is great about the contest and the Toastmasters organization, as well as all that is, occasionally, expected and traditional.

I'm going to stay positive in this review, much as I want to be critical here and there.

Katina Hunter - An Audience of One. Great chess story, excellent use of short young child vs. tall older child, and the ability to make herself the hero of a story without coming off as arrogant.

Donald Crandell - clearly had fun on stage, kept it light, Live With It message was a unique concept. Nice amputee soldier story at the end.  Makes me wish my fake leg with help me climb mountains. I think I need an upgrade.

Elliott Eddie - one of my favorite topics - Give Yourself Permission. Interesting story about wanting to be a filmmaker and his supportive wife.

Kim Kaufman - owned it. Went all in on GPS and the concept of Recalculating - a speech I've almost written myself a few times. Clearly excited about her experience, and her message. Strong close.

Sherwood Jones - as a fellow comic book geek, I definitely connected with his opening. Personal Connection message was important and timely. Good humor, and extra points for working in PokemonGo.

Kaishika Rodrigo - Loved her pacing and vocal variety. Concept of Chiseling Out Your Masterpiece is another message I've almost used in the past. The whole 'the statue is in the marble, waiting for you to release it' is intriguing. She showed real joy as she spoke.

Josephine Lee - 3rd Place - now this young lady knows who she is. She played up the California girl in a way that made it endearing when it easily could have been annoying. Her humor and timing was spot on, and contrasted well with her closing revelation about her friendship.

Aaron Beverly - 2nd Place - forever to be remembered as '57-word-title-man', his message that talking a lot doesn't equate to saying a lot was truly original for this venue. Lots of energy, great 'Bus Lady of Doom' story, and excellent delivery almost launched him into first place.

Darren Tay Wen Jie - 1st Place - Captain Underwear. Literally put tighty-whiteys on over his pants for the majority of his speech. Took the concept of bullying from external to internal, a theme I have used repeatedly over the years. Grabbed our attention, offered a twist ending, tremendous humor. A worthy champion.

Now - here's where I may tick some people off. The person I wish had won:

Thien Trang Nguyen Pah - her theme of subtle domestic abuse was certainly 'out there' for this contest, just as her 'body image' theme in her semi-final broke the mold. She was emotionally open without being manipulative. The speech was crafted well, in structure, word choice, and staging. She even got a huge laugh in the middle of a tough, tough speech. To me, no other speech approached the 'professional speech' level of this offering.

Now, I say this without wanting to take anything away from any other contestant. And with full knowledge that this is my opinion, and will likely be met with opposition.

I understand why she didn't win, or even place:

So, sure, it makes sense. But for my money, she was the best speaker, with the most important message, delivered in the most professional way. She didn't need gimmickry. She didn't need a laugh every 12.5 seconds. She didn't have to ask us 'Have you ever....' a million times. She just had to be authentic, identify the problem, touch our hearts, and offer a solution.

I understand why the Top 3 were the Top 3:

Hey - they were ALL great, and all of them had an argument for the Big Trophy. For what it's worth, my wife had Darren picked all along. In fact, everyone has their favorite, and no champion is ever unanimous.

My takeaway for Toastmasters today, however, is this:

How long are we going to allow the same formulas, the same message types, the gimmicks, to overwhelm true professionalism?

I regularly hear that 'no one would use a speech contest speech in real life', and when I show the championships to outsiders, they laugh at how 'over the top' we are. Is this who we want to be? Is this the type of speaking we want to promote? Darren, all the rest, and even myself must be forgiven for allowing ourselves to fall into this formulaic way of speaking - and even the judges must be forgiven for voting for it - because it IS what it has ALWAYS been for so long. Success leaves clues. Unfortunately, it doesn't always lead to GREATER success. And isn't that what we should be striving for in our crown jewel contest?

Thien, if you ever read this, know you are a champion in this speaker's eyes - and, trophy or not, I hope you Win Anyway as you go out into the world to Speak & Deliver the most important messages of all. 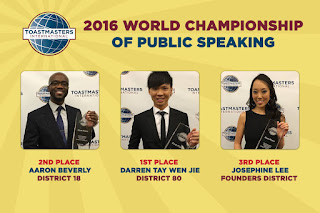 Darren, Aaron, Josephine, and all other contestants, if you ever read this, I mean no disrespect. You were awesome. You did what you were supposed to do, just as I have tried to do for over a decade now. Enjoy your triumphs, and keep inspiring us to grow.

I hope our beloved contest, as well as our organization, continues to grow as well.
Posted by Rich Hopkins at 2:20 PM 21 comments:
Email ThisBlogThis!Share to TwitterShare to FacebookShare to Pinterest
Newer Posts Older Posts Home
Subscribe to: Posts (Atom)