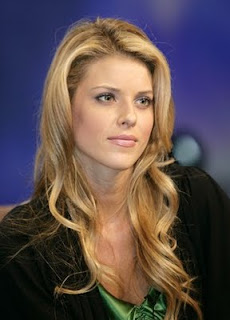 Carrie Prejean was on Larry King last night. If you don't know who she is, below is a brief bio from Wikipedia:

Caroline Michelle "Carrie" Prejean (born May 13, 1987)is an American model and former beauty queen from Vista, California. She held the title of Miss California USA 2009, and placed first runner up in the Miss USA 2009 pageant. She gained nationwide attention over her answer to a question about same-sex marriage (note - the answer was that she felt marriage should be reserved to be between a man and a woman). She was eventually dethroned on June 10, 2009, with the producers of the Miss California USA pageant citing continued alleged breach of contract issues as the reason. Prejean called those claims false, and filed a libel suit alleging that she has been discriminated against due to her religious views. However, the legal battle between her the pageant officials was settled out of court on November 3, 2009 following the revelation of a "sex tape" involving Prejean.

She just released a book called Still Standing which details her life, and what she feels is the persecution she's taken for her stance on marriage.

Now, before things get out of control, this post is not about her stance on marriage, the video she made for her boyfriend, or her opinion of "The Donald".

This post is about how people present themselves. When we speak, we have a lot going for us from the get go:

1. An introduction, even if it's just "And now Barbara will tell us how sales are going"
2. Borrowed credibility from whoever gave us the right to speak in the first place
3. Anticipation - the audience is wondering what we'll say

If we're fortunate, we also have promotion of the event, a positive environment, and a charged audience.

Carrie Prejean had all of those things, and more, going in to her interview on Larry King last night. She was ready to Speak, but she doesn't have a handle yet on how to Deliver.

She gave us harsh facial expressions, an aggressive body position, a condescending tone, and no understanding of Question Deflection (a concept I will write about in the future).

Even if you AGREED with her stance on life, she makes it hard to support her. If you're a conservative, is this type of presentation what you want representing your 'brand'?

As speakers, we must be aware of how we come across to our audiences. We can waste every last piece of goodwill given to us with an inappropriate joke or story, an aggressive and condescending tone, or a defensive physical and verbal posture. We can present these conditions without even knowing it, simply by being uncomfortable with our situation - and being uncomfortable can include being angry at the world, as Ms. Prejean seems to be.

Presenting your authentic self is worthy of respect, but if you're authentically unlikable, don't expect us to give you any credibility whatsoever. Even "The Donald" understands that.

Posted by Rich Hopkins at 11:26 AM
Email ThisBlogThis!Share to TwitterShare to FacebookShare to Pinterest