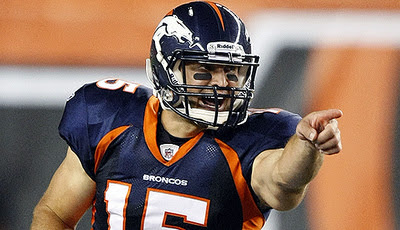 I admit it - I'm a big Tim Tebow fan. It helps that I live in Denver. It also helps that he appears to be a pretty nice guy with a value system that's fits nicely with my own. But there are bigger reasons - reasons that, if you stay with me a few lines, can make a difference in your success or failure as a speaker.

As an NFL quarterback, Tim is not considered prolific. He doesn't pass for 300+ yards every game, he doesn't have a pretty throwing motion, and he's more apt to run than step up in the pocket and find an open receiver when he's under pressure. He'll never be compared to Peyton Manning and Tom Brady. But since he's taken over as QB for the Denver Broncos, he's taken them from 1-4 to 6-5, and in a position, however unlikely, of making the playoffs.

If you haven't heard of Tim, or 'Tebowing', or seen Tebow Time take over at the end of games, that's OK - its not required. All you need to really understand is that Tim is a Winner. Not because he wins games (though he does), but because he plays to win, he works to win, he believes he will win, against all odds and despite every naysaying coach, owner, analyst and opponent.

Great Rich - you love Tebow, you big, Bronco-loving freak. Why should I care?

Because if you approach speaking the way Tebow approaches football, you'll succeed. You many never be Zig or Tony or Brian Tracy or Patricia Fripp, but you'll inspire people. You'll make a living (a good living). And you'll be better every week.

"Tebow believes in what he believes in. It's amazing.
He doesn't change for anybody. He's the same 24/7.
I've witnessed it on tough days, cold days,
he's the same every day. What (Tebow) has his mind-set on is going to work. And it does."
Excerpt from the Denver Post interview with Von Miller, Broncos defensive star.

How hard are you working on your speaking? REALLY working? How many calls do you make to get scheduled as a speaker? How much film of yourself do you watch? How much writing are you doing? Do you have a coach? Do you have folks on your team you can count on?

How much do you believe in yourself and what you are doing? Tim Tebow shows such a high level of belief, not just in his faith but in himself and his teammates that they believe in him, the fans believe in him, and more and more of the football world is believing in him every day.

Turn your back on every doubter, every critic, and every excuse. Practice, practice, practice. But don't sit in the locker room. Get out there on that field and take a snap. The only way to win is to get in the game...to Speak, & Deliver!


Posted by Rich Hopkins at 7:46 AM
Email ThisBlogThis!Share to TwitterShare to FacebookShare to Pinterest