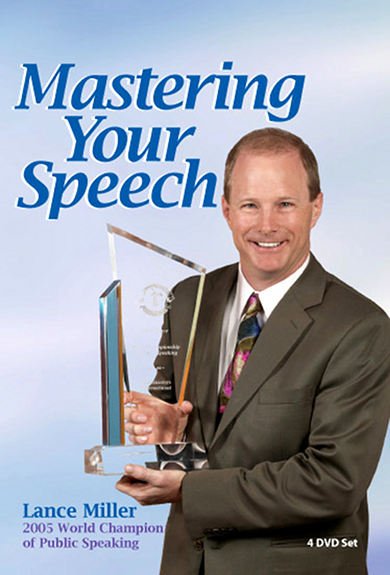 But, part of my original list DID include some audio/DVD programs on Public Speaking, and 'Mastering Your Speech' - a 4 DVD set by 2005 World Champion of Public Speaking Lance Miller was #51 on that list.

I was very interested in this particular product, in part because I haven't been as exposed to Lance's teachings as much as I have some of the other Champions, and because what I have heard, both on YouTube and in person when he appeared at our winter Toastmasters Leadership Institute, has been spot on, in my opinion.

I was excited to finally get some time over the last week to watch/listen to this series. It's professionally filmed in front of a live audience, offers some Q&A, but is primarily a four-hour long training by Lance.

You could tell it was specifically being put on to create this product as he was careful to end exactly on time every hour, interrupting himself and his Q&As and letting them know he was stopping, but would take more questions. I'm not sure if this was all filmed in one day, or over a couple, but I'd bet on the one-day approach, just for the sake of the cost of a multiple camera shoot. It would have been interesting if he'd added a fifth disc with some of the now off-camera Q&A.

The program is primarily focused on preparing a speech for the International Speech Contest, though the concepts and principles discussed are universal, so it works as a public speaking training as well. It's his insights into the contest process, though, that really piqued my interest, mostly because I am, as you probably know, a contest junkie.

Heck, I might've competed against Lance had I not gone overtime by 3 seconds at my Regional that year. But I digress...

He covers a great deal in the four hours he filmed - below are a few highlights:

Lance also offers us a basic speech outline - attention/orientation, open the file, familiar, make the change, drive it home, take it home, which he stresses are more guidelines than a set and fast structure. What is particularly useful is his illustration of the outline with a short speech.

Of course, he also covers basics such as stage usage, gestures, and eye contact, and offers some strong strategies for drilling yourself on your speech, as well as the use of notes in a longer speech.

Where he really gets my attention, contest wise, is in his discussion of the importance of evaluation, and his live breakdown, both personally and via the audience's responses, of 4 iterations of his championship speech - videos of which we get to see along with them, with the exception of the ACTUAL Finals speech, which he didn't own the rights to, and he replaced, on the DVD at least, with an encore, word for word, performance on a regrettably gold curtained set...

I'd rank this at the top of all the different trainings I've seen regarding the contest, specifically. Chock full of great information, with a strong how-to aspect that any aspiring contestant can go by as they begin the competition season.

I strongly recommend all potential contest speakers go out and pick this up, then find themselves a coach to walk themselves through the process. There's no need to go through it all alone, much less face a learning curve so many others have already faced.

5 stars out of 5, whether you compete or not. Great information throughout for speakers looking at improving themselves, their messages, and their delivery.

Posted by Rich Hopkins at 2:11 PM
Email ThisBlogThis!Share to TwitterShare to FacebookShare to Pinterest