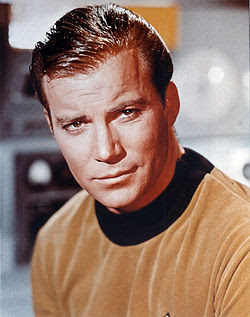 There are tons of great movie speeches out there that get talked about all the time. From Charlie Chaplin's speech in The Great Dictator to Michael Douglas' Greed is Good monologue in Wall Street to Mel Gibson's Freedom speech in Braveheart. Along with YouTube, these speeches, and often their transcripts, can be found on AmericanRhetoric.com.

My exposure to inspirational speaking, however, came in front of a much smaller screen. A 13 inch, B&W TV, in fact, in the early '70's. My favorite show, then and now? Star Trek. The original, in all its blue-screen, plastic models flying through space, Styrofoam-boulder-filled planets, glory. As a five, six, and seven year old, it showed the future just as I'd imagined it would be. I'm a bit disappointed as an adult, but I have confidence the 23rd Century will see it all come to pass.

For better or worse, the first major public speaking I encountered came via Captain James T. Kirk, as he would monologue his way through space, preaching to alien race after alien race, when he wasn't busy finding a young lady to woo.

The speech that has stood out the most over the years? His recital of the preamble of the U.S. Constitution in The Omega Glory, which first aired 3 months before I was born. A good synopsis of the show is here. Cutting to the chase: after bringing two warring sides into the same room, and barely surviving yet another fistfight rumble, Kirk pulls out the planet's 'holy document' and begins to read....

Wow. Dramatic overacting combined with bombastically piped in music at its glorious best! Plenty of people like to criticize William Shatner (who played Kirk, for any of you non-trekkies) for his intense, often stunted delivery of his lines. Few recognize that he was a Shakespearean-trained actor thrust into icon-like status in the sixties but maintained his relevance in show business long enough to pull off T.J. Hooker, and later Boston Legal. Even last year he was showing his comedic chops, at least what's left of them, on $#*! My Dad Says.

Now I'd never be one to claim he's as good an actor as Marlon Brando, Dustin Hoffman, or Tom Hanks. But  he (or Kirk, or the writers...) still did some great things in this clip.

A. Controversial Opening - This was not meant for Chiefs! He got their attention quickly by challenging their belief system. Yeah, he risked being pummeled by oversize pseudo-Native Americans, but he was able to settle them down long enough to continue. You probably won't have to speak to a crowd holding large spears, but you will want to knock your audience off center enough to get their ears, pointed or not, to perk up. 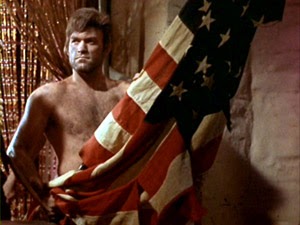 B. Identifies With Audience - By saying his people has similar words, that they are indeed great words, he gives both a piece of himself while affirming the importance of the holy words to his audience, even in light of his Controversial Opening. At no time does he say "Gee, you ripped these off from my ancestors", even though he surely must have had that going through his mind. What are you saying to your audiences to help them realize you are 'on their side'?

C. Perspective Switch - Kirk shows he understands the words and resets their meaning in the minds of his listeners. He displays a deeper understanding of "We the People" that ultimately resonates with his audience. How are you taking well-known words, statements and morals and re-framing them for your listeners?

D. Passion - There is no doubt he believes what he is saying with a passion unequaled in the room. If you are in a room without a soundtrack, mimicking his delivery may send your audience into hysterical laughter. But that doesn't mean you can't show emotion - joy, sincerity, and assertiveness - when you speak.

E. Recap and Call for Understanding - Who hasn't had an audience that they haven't wanted to poke in the chest and demand to know if they understand? Kirk brings it down a notch to repeat his moral - the document is for everyone, and then measures his audience reception before beaming back up and wreaking havoc on his next adventure. Do you make sure your audience 'gets it'? Do you take questions? Do you ASK questions? Affirmation, even in a small way, from your audience will increase the retention of your message.

I have been accused, at times, of being a bit over-dramatic. I blame Kirk. And the preacher's I heard growing up, but that's a different post. Still, we can learn from both the good and the bad speaking we see in entertainment - and did you really want to hear another analysis of the Patton Speech?

Live Long and Prosper - and Speak & Deliver!
Posted by Rich Hopkins at 10:35 AM
Email ThisBlogThis!Share to TwitterShare to FacebookShare to Pinterest