What Should I Do With My Hands? 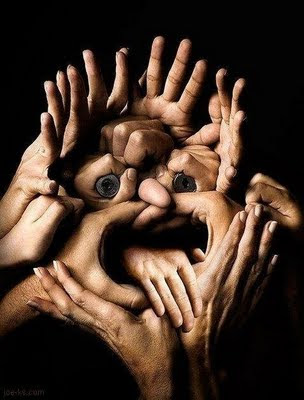 A while back, I talked about the pros and cons of Planned Gestures. Today, lets talk about Planned Hands. If you don't plan before you speak, no matter how experienced you are, you are likely to run into trouble. Hands have a mind of their own, it seems. Without a clear plan ahead of time, they can start moving completely on their own, leading to big trouble for your speech. Your audience may end up more concerned with where your hands go next vs. what you're saying next!

Purses - hand in hand, fingers usually interlaced, palms inside, about belly high. A sure sign of insecurity about your weight or the effectiveness of your belt, though you might be holding lipstick, just in case.

Fig Leafs - a lower Purse gesture, apparently used to ward off tomato tosses to the groin.


Pockets - a common ploy, sticking one or both of your hands into the pants pockets. one makes you look a bit casual, two a bit uptight, and either way we're wondering if you're going to pull a gun, a pencil, or a frog out of your pants. Taken to extremes, I've seen guys stick their hands into their front suit jacket pockets as well. Tsk, Tsk.

Professors - hands clasped behind your back. Unconsciously, we think it makes us look more thoughtful and intelligent. But many in the audience are waiting for us to pull out a wood pointer and rap their hands if their attention wanders.

Steepling - fingertips to fingertips - another attempt to look smart, it also bring old teachers and preachers to mind, as we wait for the top of the steeple to start pointing in our direction in some accusatory manner.


Massages & Facials - I used to have a beard and mustache, and it was the hardest thing ever to not stroke the beard in 'thoughtfulness' as I spoke. Touching your hairless face is also distracting, as you prop up your glasses,  touch your nose, wipe your brow (though, with the lights, sometimes you have little choice), rub your eyes, or, in a stressful moment, grab the back of your neck.

Hair - flipping, scratching, finger-raking, sometimes an all-out, two-handed, toss-back. Get your hair under control before you go on, and leave it alone!

Pinocchios - I gave an impromptu speech last night, and got nailed for puppet-hands. That is, half-gestures where your hands sit at mid-level, seeming always ready for defensive combat. This results in impotent gestures  that you think of on the fly, unplanned and ultimately ineffective.

Deadly Weapons - pens, glasses, notes, pointers, remotes - one of these days you're going to let go at the wrong time and someone is going to get hurt.

Mixed Martial Arts - constant fists, karate chops hands, and pointing fingers. Communicate with me, don't make me worried you're going to hit me.

Anchors - the extreme opposite of the above. "I'm not going to move my hands and you can make me!" Take the chains and anchors off your wrists. Using your hands isn't a bad thing when you know what you're doing.

If you can come up with more, add them in the comments below. With so many moves we shouldn't make with our hands, exactly what should we do?

First, train yourself to comfortably leave your hands by your sides. Not straight-arrowed, but casual.

Second, practice hand gestures that have meaning, and have an idea where in your speech you will use them. Planned Hands are subtler than Planned Gestures. Still, you want to know what you look like when you try various hand placements and movements, and you want them to be used sparingly, so they are effective when used.

This doesn't mean becoming a robot. And it doesn't mean that if you occasionally (emphasis on occasionally) do a few of the unconscious hand gestures you're doomed.  It simply means becoming more aware of your movements, and learning to be intentional on stage. Because its what we do UNINTENTIONALLY that can ultimately hand our presentation a deadly blow.

Posted by Rich Hopkins at 10:30 AM
Email ThisBlogThis!Share to TwitterShare to FacebookShare to Pinterest