You're Not As Good As You Think You Are 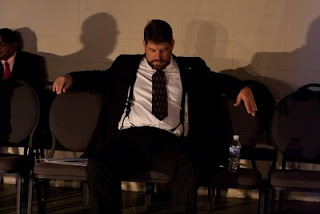 Last month, I attended a fairly new Toastmasters club. They were having a 'training night', and showed three speeches from the 2008 World Championship of Public Speaking - the winner, LaShunda Rundles, and two others: Jock Elliott, a five-time finalist and my own (it was my 2nd appearance in the finals).

I have only viewed that video twice, and not once in 2009. Having that much separation in time from the event, I was able to watch my speech with 'new eyes'. I am over the sting of 'losing' (as if being in the Top Ten out of 25,000 worldwide should be considered losing), and have put that summer of victories and defeats into some perspective.

Despite this supposed 'perspective', I cringed several times watching the speech. My head was spinning with all the things I could do differently with that speech. Gestures, phrases, transitions all could have been better. That moment is past, never to be retrieved, of course. Just tortuously set in digital stone for posterity.

But after the meeting, I had four separate people, none of whom had met me before, tell me how much my speech meant to them. They espoused their own interpretations of what I offered, found value in my persistence and perspective, and appreciated the raw authenticity of the speech. None of them said I should have won, but they all got my message, which is its own victory.

Back on that August morning in 2008, I remember thinking, as the awards were being called, that I had given a great speech, a championship-winning speech. Watching the DVD,I was mentally beating myself up as I watched myself in living color and stereo sound. In fact, I was actually somewhat embarrassed to have them watch the speech. No, Rich, you're not always as good as you think you are.

Despite my own criticism, however, the speech was a success. It didn't take home the prize, but if affected people significantly that night, and continues to affect those who watch it on DVD. People without a rooting interest. People who aren't 'in the moment' of the big contest. Just folks sitting in chairs in a church basement watching TV. No, Rich, you're not always as bad as you think you are.

Yes, I would love to go back and fix that speech. Yes, we can always do better. Yes, we should strive to improve our speaking and presentation skills, and be open to criticism from our audience, coaches, and selves.

Take heart in this: If your message is strong, the audience will find it, even when you are less than perfect. The audience, for the most part, is not picking you apart as you speak they way you will do to yourself. They are in it for themselves, and what they can get out of you. We must always give our best, even if our best isn't our best. As a wise coach once told me - our best speech should always be our next one.