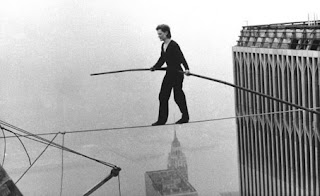 Depending on your equipment,
speaking can seem this dangerous...
North Platte, Nebraska today. Small audience at the local community college. OK video setup, booming audio, overall a positive experience - except for the microphone, which was corded. I've spoken at 100s of venues over the last 22 years, and only used a corded mic, believe it or not, 2 or 3 times. So few I barely remember.

The most unique aspect about using it last night, however, was something new. Normally, you can feel the cord with your leg and brush it out of your way. With the prosthetic on my left side, I didn't feel a thing, and became super-conscious of not tripping over the cord, which actually made me more uncomfortable than if I had just let it go.

I did practice with it beforehand, like a good little speaker, but not enough, apparently. I never fell to ground, but I did stumble once, and dropped the mic at one point. Bending over with a bad back on stage to pick up a microphone is one of the single most embarrassing actions one can perform on stage. With the leg to boot, I was slowly bending over, with nothing to hang on to, working to not lose my balance and end up on the floor next to the erstwhile mic. At least I didn't have my back to the audience! A humbling experience - but the show must go on, despite the creaking of vertebrae.

The crowd was forgiving, and the presentation went well overall. Not sure how many folks in North Platte really intend to travel next fall, but that, again, is now out of my hands.

One aspect of being a traveling speaker is eating out every day, which I've touched on before. In smaller towns, I'm usually stuck with chain restaurants and mediocre fare. Interesting though, that a year ago this 'mediocre fare' would have seemed pretty good to me. But now, having had the opportunity to eat at some of the nicer, non-chain local cuisine in the bigger places I speak, I have gotten a bit spoiled. But no matter how spoiled I may have become, I do think I found the world's worst Ruby Tuesday's last night....still, a blessing to be able to eat, right?

10 hour drive ahead of me today to get to Minneapolis. No speaking, so I guess it makes it a 'day off'. Tomorrow is another 4 pak followed by 3 on Sunday. The next three days are going to fun - because I said so...! Time to go drive now, so tomorrow I can Speak...and Deliver!
Posted by Rich Hopkins at 8:37 AM
Email ThisBlogThis!Share to TwitterShare to FacebookShare to Pinterest