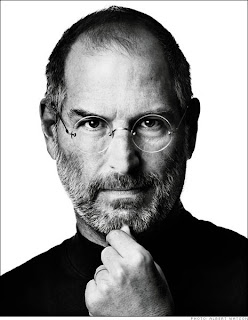 Steve Jobs, the iconic CEO of Apple, the financial engine behind the success of Pixar, and oft-described fantastic speaker has retired. Jobs' speaking was peppered with stories, humor, and dream-building. His magic from the stage, however, came less from what he would say and how he would say it, and more from who he was, and what he had done. More than a 'celebrity' speaker, he is a 'celebrated' speaker'. An innovator, natural marketer, and pioneer, his audiences wait with expectancy each time he opens his mouth, waiting for the next iMac, iPhone, and iPad.

Jobs is a prime example of the power that can be achieved when communication meets leadership and creativity. When a leaders message can be clearly understood and adopted. We are all in leadership positions to some degree. We may be 'bosses' at work, parents at home, deacons at church, officers in service clubs, or even just unknowing examples to those around us wanting to achieve what we've achieved.

Imagine what will happen when you learn to effectively speak as a Leader. Imagine making a real difference. Imagine changing the world around you, and the people who hear you. Imagine what it can be like to Speak & Deliver.

This Stanford Graduaation speech is not brilliant oratory, at least in terms of presentation and transitions. But the impact he is making on his audience is obvious.


Stories. Dreams. Humor. Inspiring Change. That's what Speak & Deliver is all about.
Posted by Rich Hopkins at 9:46 AM
Email ThisBlogThis!Share to TwitterShare to FacebookShare to Pinterest