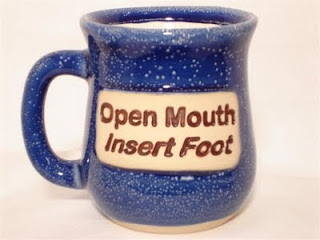 It's amazing how often we speak without thinking.

It seems like life was a lot quieter when I was younger than it is now. That people thought before putting their foot squarely in their mouth. Of course, that perception is just a cross between nostalgic perception and the fact that as a kid, I never payed attention to what anyone was saying anyway.

It's almost impossible not to pay attention today. Between 500 cable channels, the internet, and the constant beeping of smart phone news updates, reports of rampant stupidity are just a YouTube away. Athletes and celebrities spout off on Twitter and lose endorsements and jobs voicing web-footed animals within hours of their ill-advised rants.


But technology only magnifies what has existed for years - the innate ability for people to stick their foot in their mouths in a moment of uncertainty and stress.

Today there's a report that Lars von Trier has been banned from the Cannes' film festival for blowing it the old fashioned way - by speaking off-the-cuff in an interview, trying to be funny, but revealing a bit too much about himself. Invoking the name of Hitler is always a dangerous road. Joking about him is near suicidal in the arena of public opinion.


Off-the-cuff speaking can be intimidating, humiliating, damaging, and dangerous. It can also reveal moments of helpful honesty, insightful information, and spontaneous brilliance. How do you help create more of the latter than the former?

1. Pause. Don't just say (or Twitter) the first thing that comes to mind. A few seconds of silence isn't a bad thing in this situation, and won't even be noticed in most cases.

2. Restate or Reframe the Question. This buys time, improves understanding, and helps you formulate an appropriate answer.

3. Use Periods. Instead of a long, run on answer, be willing to stop. The second between sentences could be a second for you to use better judgment.

4. Shut Up. If you feel yourself going on a tangent - be willing to stop talking. Just say - "but let's not go there" and put the interviewer back on the spot.

5. Practice. If you're in these situations often, drill yourself ahead of time for potential question and answers. In the kitchen, in the car, in the shower - anywhere but in front of the microphone. Inexpensive practice in front of a less judgmental audience than a horde of reporters can be found at a Toastmasters near you.

As speakers, we spend a great deal of time carefully crafting every word we say on stage.

As humans in today's communication-driven society, we must now, more than ever before, work at crafting what we say in them moment, as well. We must Think, Speak, & Deliver.


Posted by Rich Hopkins at 9:53 AM
Email ThisBlogThis!Share to TwitterShare to FacebookShare to Pinterest