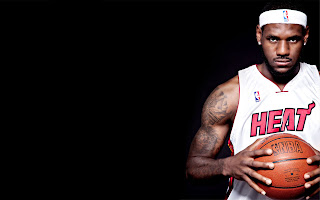 Is it finally LeBron's time? LeBron James has made it back to the Eastern Conference finals, this time with the Miami Heat, leaving Cleveland and his legion of hometown fans behind. He still has to get past the Bulls, and likely the Dallas Mavericks, on the NBA's Big Stage - The Finals - in order to fulfill his youthful ordainment as King James, but many say this is the year.

This time of year, many Toastmasters are saying the same thing. LeBron has essentially gotten himself out of District - and is heading to the semifinals, in hopes of another shot at the big stage and the big trophy.

About half the Toastmaster Districts have crowned their champions for the semi-finals of the World Championship of Public Speaking in Las Vegas the third week in August, with the rest to be crowned in the next 3 weeks. Every year, 81 winners compete for the 9 finalist spots on the final Saturday morning of the Toastmasters Int'l Conference, where one will be crowned champion. (Yes, I know, the current format is only two years old, but work with me here...)

Did you compete this year? Are you still competing? Are you watching your friends fret and sweat and practice as they compete? As if speaking in public isn't frightening enough to most, whose idea was it to pit speakers against each other, leaving 29,999 losers in the search for a final winner? Well - its not quite that bad - but it is a bit daunting when you think about it.

I have been among that large group of losers 9 of the last 11 years. I took a year off, and I'm still alive, just barely, this year. I've lasted a long time most years - getting to the semi-finals six times, and the Finals twice, but, like LeBron, I have fallen short, just like the other 29,999 competitors worldwide.

Competition, win or lose, has been a wonderful teacher for me over the years. Without it, I would never have spoken professionally, chosen to go out and coach others, or learned to Speak & Deliver. 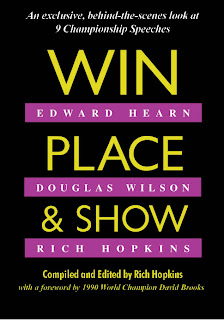 In 2006, I experienced my best finish - third in the world, with Douglas Wilson finishing second, and Ed Hearn taking home the Holy Grail of Toastmasters Speaking. After the championship, the three of us wrote a book - Win, Place, & Show.

It features all nine of our speeches from the contest rounds, in the format we worked from when we wrote them (Douglas was a stickler for stage direction), and includes our personal stories from the journey - how we dealt with doubt, evaluations, pressure, health issues, and victory along the way.

I've turned it into an ebook, and its available for the next six days (right up until my conference next week, where I will once again compete to reach the semifinals against 5 other tremendous speakers from CO, NE, and WY) for only $10.

Even if you aren't competing - the speeches themselves (at least Ed's and Douglas') are worth thirty-seven times the investment in and of themselves. Inspiring, funny, and memorable - and a tremendous teaching tool for you, your hyper-competitive friends, and your Toastmasters club.

Click here for your copy of Win, Place & Show!

If you are still competing - hopefully you aren't experiencing the pressure Mr. James is under. Go out, have fun, and remember you get the chance to change the mood, opinion, and actions of your audience. And if you lose, no one is going to drop beer on you as you head to the tunnel!
Posted by Rich Hopkins at 10:23 AM
Email ThisBlogThis!Share to TwitterShare to FacebookShare to Pinterest