Clint Eastwood at the RNC: 9 Ways He Made Our Day

Last night, Clint Eastwood gave the world what it wanted. He gave the Republican National Committee a rousing speech that is being talked around the world. He gave people who are not Republicans a performance they could denounce and demean. He gave political pundits and comedians alike bullets of every type for their next offensive, both for and against Mitt Romney.

He also gave speaking coaches around the world a wonderful speech to pick apart on so many levels. I've seen blogs calling Mr. Eastwood out for being disrespectful to our President, for speaking too long, for rambling without a script, and for being 'drunk old Uncle Harry'. All valid commentaries, in certain perspectives.

My only, non-partisan, mind you, question is - did he Speak & Deliver?

1. Self-Deprecation and Focus. He immediately began by disarming the audience with a quick joke about the grand ovation he was given - 'Save a little for Mitt'. Short and sweet, he deflected his recognition back to the main star of the night.

The Lesson - the ovation was long and loud, but Mr. Eastwood knew why he was there. Do you know why you're speaking to your audience? Along the way, he refocused them on the reason THEY were there.

2. Voice of the Audience. He immediately connected with thee minds of the audience ("I know what you're thinking") and assured them that despite their doubt, yes, conservatives live in California. Then he tossed in a zinger for good measure "they just don't go around 'hotdogging' it". Great way to identify with his audience, and soften any concern they might have about this 'movie tradesman' speaking to them.

The Lesson - know your audience, and let them know you know them. Self-deprecation can go a long way, even combined with a sneak attack on the 'enemy'.

3. The Chair, Part I. Wow, has this one become a lightning rod. Was it immature? Disrespectful? Goofy? Maybe it was all those things. It will also be remembered, for better or worse. It is at this point we have to ask from what vantage point Mr. Eastwood is speaking. Is he meant to be a political expert? Or is he there as an entertainer?

His opening background was not a picture of him during his political days, but from The Outlaw Josie Wales, looking all rough and tumble with a beard and a cowboy hat. Not exactly a foreshadowing of a highly intellectual speech. Consider the other rumored speakers for his slot - a hologram of Ronald Reagan or Tim Tebow.

If the speaker had been Jon Stewart, would we look at the chair prop, the Harvey-style conversation, with the same eyes? Or would it have been automatically viewed as a mechanism for sarcasm? Would we care if Conan O'Brien were 'disrespecting' the president?

In what could be viewed as either 'being a good sport' or 'arrogance', the Obama Campaign came back with by retweeting this image. So - either good humor or inappropriateness is certainly a bi-partisan event. 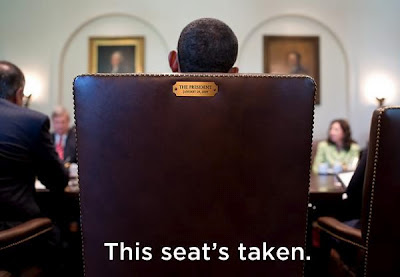 The Lesson - be willing to go all the way, to risk pushback and ridicule, if you truly want to say what you want to say. Mr. Eastwood was nothing if not true to himself during this speech, and at this point in his life and career, knows he has little to lose.

4. The Chair, Part II. Appropriateness aside, Mr. Eastwood's use of the chair was consistent, effective in creating an illusion for the audience, who no doubt had President Obama in their minds sitting right there, in whatever capacity they see him in, respectful or not, and provided well-timed humor moments via imagined interruption. Even Bob Newhart recognized the 'bit' as being borrowed from his own one-sided phone calls on his early albums, dryly threatening to sue Clint on his Twitter account.

The Lesson - creating a character onstage can be very effective, particularly for humor - but know the audience ahead of time.

5. Political Statements. Not much in the way of strong political statements. Straight-forward questioning on campaign promises, from Gitmo to the return of the troops, and a couple of barbs on student loans and the war in Afghanistan, but nothing with meat to it. Pandering, really, to an audience waiting to eagerly lap up anything negative about the POTUS.

The Lesson - don't go out of your depth. He took easy shots, and kept moving.

His strongest statement was delivered through the voice of Mitt Romney and his statement against declaring target dates and simply bringing the troops home. Again, Mr. Eastwood directed the attention to the real star of the night.

6. Profane Humor. Watch the video, and Mr. Eastwood is never all-out profane. He implies profanity from the president, but never quotes him. The combination of  'what do you want me to tell Romney? I can't tell him to do that - he can't do that to himself' with his callback of Invisible Obama telling HIM to do the same thing was dark slapstick at best, vulgar at worst, but was received with raucous laughter and approval from his audience.

The Lesson - if you're going to be risque, be prepared for people to love you and criticize you with equal power. I think Mr. Eastwood is more than ready for the consequences of his sarcastic approach.

7. Stray Rambling Comments. His speech was supposedly slotted for 5 minutes, and went twelve. Part of this was his halting style as he seemed to be speaking sans prompter or script. Part of it was also rambling, extraneous comments about not wanting lawyers in the white house because they argue too much and suggesting we needed a successful businessman running the country. Neither of these were particularly necessary statements, though they both supported Romney - sort of - Romney has a law degree. Wonder if Mr. Eastwood knew that?

The Lesson - no matter how legendary you are, go in with a plan that fits the plan of those who brought you in to speak. Taking too long is both a discourtesy and an opportunity for you to say more than you need to say.

8. Back to Business. At the 8:30 mark, after the aforementioned dark slapstick callback, Mr. Eastwood changes his tone, and indicates he wants to say something, in such a way as to separate his next comments from everything else. He knows he's been playing the comedian, the entertainer, and now he wants to be taken a bit more seriously.

This is when he regains his gravitas, his strength of character both real and perceived, and gives the audience a sense of pride and a mission to embark upon. "We own this country....politicians are employees of ours" He attacks politicians of every party with his comments about coming around every few years to beg for votes.

Then he goes for the jugular, literally - "When someone does not do the job, we've got to let 'em go" - repeated for emphasis, and accompanied by a slash across the throat gesture that would get him kicked out of an NFL game, and was, for my taste, his most over-the-top moment of the night. It came on the heels of his strongest moment, weakening both the statement and his credibility for many.

The Lesson - gangland gestures will reduce your credibility even more than implied crass comments from an Invisible President in the minds of some.

9. Make My Day - the audience has been waiting for it, calling it out from the cavernous convention floor, and finally he gives them what they want. A classic audience response moment where he tells them to finish it for him. The crowd emphatically closes his speech with a loud 'Make My Day", and he immediately thanks them and departs.

The Lesson - end on a crescendo, and know when to quit. Even if you should have quit five minutes ago, you still want to quit with strength.

From a speaking perspective, I don't believe Mr. Eastwood's speech was the train-wreck I've heard it described as throughout the day. He double-clutched and paused too often and occasionally seemed to be making it up as he went along, sure. But he was also vintage Eastwood. He was exactly who he is, and if the RNC was caught off guard, it's really their fault, not his.

Politics and political correctness aside, I think he provided a great show, and did exactly what they wanted him to do - give his audience reason to cheer, reason to feel good about themselves, and an iconic lead-in for a would-be president who is too often seen as quite the opposite.

Eastwood did indeed Speak....and Deliver!
Posted by Rich Hopkins at 5:41 PM 2 comments:
Email ThisBlogThis!Share to TwitterShare to FacebookShare to Pinterest 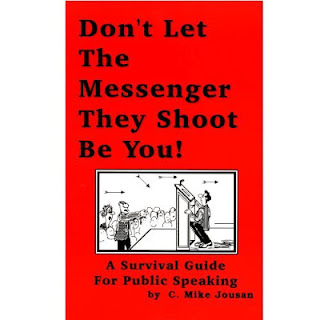 
Posted by Rich Hopkins at 7:42 AM 3 comments:
Email ThisBlogThis!Share to TwitterShare to FacebookShare to Pinterest

Speaking of the 2012 Toastmasters International Convention

Just a few words from my heart to those of you competing at the World Championship of Public Speaking this year....
Posted by Rich Hopkins at 12:09 PM No comments:
Email ThisBlogThis!Share to TwitterShare to FacebookShare to Pinterest

Speaking of the Perfectionist Bug