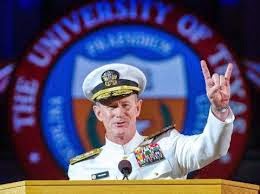 Now I've seen and heard it - and I'm both impressed by the content and depressed that this speech is all it takes to get the world all a-Twitter about a speaker. Before I break down my thoughts - here's your chance to watch it yourself.

First, let's focus on what Admiral McRaven did well:

A. Strong Start - even though he started with 'thank you's'. If he'd just started with 'It's been almost 37 years to the day...', he would have been fine. Really. But I digress - the power of three started him well as he went to connect: the headache from the party, his girlfriend/now wife, and the humorous twist about his own commencement speaker. He let them know he 'got' them, and gave a promise - that he would be short. 20 minutes? Yeah, it's a TEDtalk - so short enough.

B. Promising Premise - that we can all make a difference, combined with a 'proof' story of soldiers that make decisions that affect not just individuals, but generations. He then promises us that we don't have to be in the military to make the difference, and 'asks permission' to tell us how. An old method, but smoothly done with just a touch of self-deprecation from this 'old sailor'.

C. Point, Story, Point, Story - in the grand tradition of public speaking for the last 100 years and more. It's not just the structure that was effective, but the choice of stories - starting with 'If you want to change the world make your bed' kept the talk from being immediately dismissed as too serious or overly dramatic. Further stories alternated between third-party and personal, and all served to support is overall premise.

D. Dressed the Part - like it or not, the uniform gave him more credibility that a long introduction (which may have actually happened, granted) paired with him in a regular suit. Now, if he had not given a Navy Seal speech, he may not have worn the outfit - but why would he give any other speech?

E. Hired a Speech Writer - ok, I have no way of knowing this, it's a total assumption. It's well-written, concise, filled with strong transitions. If he wrote it, he's definitely got a future when he retires. There's nothing wrong with hiring a speech writer, especially if your main role in life is not speaking, and often, it's a much better alternative than spending all the time and stress of writing one yourself. Just make sure you find a writer that is willing to learn to write in 'your voice', vs. a copywriting propoganda machine.

F. Kept his Promise - through the point/story approach the Admiral provided instruction, and through his closing 'ring the bell' metaphor, and a cursory mention of others who have made a difference, he gave us a call to action, both of which brought the audience to a point of closure and certainty that they could, as he promised, make a difference.

What he could have done better:
A. Eye Contact - perhaps it's the hat, perhaps its the camera angle. But I really think it's simply that he's attached to his script. More practice would help with that, and a bit more trust in himself. Trust that he knows his stories, particularly his personal ones, well enough not to need the notes. After all, what is his audience going to do, call him out on telling them wrong?

B. Vocal Variation - I know, he's in the military, and he used his 'voice of authority'. Constantly. Virtually no variation of range. It's wasn't monotone in a 'Bueller, Bueller, Bueller' sense, but it was extremely even, despite so many opportunities to go loud or quiet, faster or slower, and higher or lower in pitch. Much of his material that could have brought large amounts of laughter (munchkin boat crew, sugar cookies, and jumping down the rope headfirst, in particular) failed to do so because he was so blasted serious the whole time. Vocal cues (and, y'know, an occasional SMILE) let us know it's ok to laugh.

C. Been Shorter - Yes, I said he kept it to a TEDtalk, but he could have shaved off 5 minutes without losing much. Had he leveraged his humor better, I wouldn't have had an issue with the time, though. Laughter make any speech seem shorter.

D. Identified our Bell - 'ring the bell' is a pretty common metaphor in a military speech. What bells will his audience face? A quick round of three examples, even a humorous example in the end, followed by a repeat of the 'ring the bell' concept, would have anchored the thought in the minds of his audience in their own terms, giving them more traction with the idea, and a better chance of retention of the meaning, not just words. 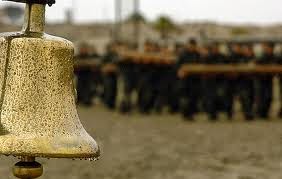 Is this a great speech? No, I don't think so. Is it a strong speech, with an important message, that will be remembered for awhile? Yes, certainly. Is it better than 90 percent of what passes for a great speech these days? Almost without a doubt.

Could it have BEEN a great speech? ABSOLUTELY.

It all comes down to the element of delivery.

That's what I strive for in my speaking, and in my clients speaking - matching strong content with great delivery - so that they work together to create a truly great speech. That doesn't mean there aren't a lot of good speeches out there. Nor am I trying to tell you that this speech is a bad speech. It's a very good speech.

One I wish had been GREAT.
Posted by Rich Hopkins at 7:55 PM 4 comments:
Email ThisBlogThis!Share to TwitterShare to FacebookShare to Pinterest
Newer Posts Older Posts Home
Subscribe to: Posts (Atom)