Toastmaster Sunday: Do I Still Get Nervous?

Yesterday I competed at my first Division Contest in two and a half years.

The nerves hit the moment I stepped through the doors of the conference area at St. Anthony's Hospital in Lakewood, CO. My stomach cramped up. My breathing sped up. Walking to the preparation area that Evaluation Contestants are led to after the test speaker, I thought I might literally pass out. I couldn't catch my breath until 5 seconds before my name was called - and I was the sixth evaluator out of six, so I had quite a wait.

You'd think I'd be fine after that, but Tall Tales was next, and I was fourth out of five. The breathing troubles started again. I started shaking. I was going over each moment of my speech, trying to map it all out, and pay enough attention to the speakers before me to be both respectful of them and mindful of any overlap in content, or callback opportunity.

Yes, I was nervous. And it felt GREAT!

After competing in the Semi-Finals of the International Contest for Toastmasters back in August of 2011, I took some time off from the competition scene to focus on my family - which was just beginning to discover some major medical issues with our children with Neurofibromatosis, including brain tumors (our oldest daughter, Bailey, started chemo during the 2011 contest run, and completed her first set of rounds in Spring of this year, and remains stable), scoliosis, and degenerative disk disorder, among others.

I didn't abandon Toastmasters - I just focused on the leadership track, and became an Area Governor, which, for me at least, was a lot less time intensive than competing. I didn't need two years off to be an AG, of course, but I deliberately announced before the 2012 contest to DQ myself, just so I wouldn't be tempted to even try again.

For those who don't know, I'm a bit of a competition junkie - particularly with the Int'l - I competed from 2001 to 2009 as well as in 2011, getting as far as the Semi's seven times, and the WCPS twice - so it took a great deal of time away from everything else in life.

Back to yesterday. This Fall my District switched from the Humorous Speech Contest to Tall Tales, and the second contest is my second favorite - Evaluation. After two years away, I was chomping at the bit to compete again.

Evaluation is the easy one to deal with - no prep. But for Tall Tales, I dusted off a story I wrote about 10 years ago for a Tall Tales competition in Utah - and polished it with everything I've learned since then about writing, speaking, performing, humor - and dove right in. 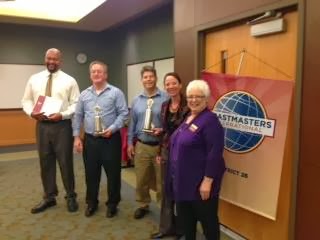 Why? Why would a guy whose competed in 100 or so contests, who speaks and coaches professionally, who get invited to Districts to speak at the conferences on a regular basis, still get nervous?

Because, well, I've competed in a 100 or so contests - and each is different. I speak and coach professionally, and get invited to conferences regularly, which means I have to live up to my own reputation. And - because I care - yes, about winning, but also about doing the best I can do - win or lose, and not phoning it in, which becomes fairly easy to do when most of my TM speaking these days, at the club level at least, comes because someone has dropped out at the last minute.

One of the most common statements I hear from people about the fear of public speaking is that it makes them nervous. That nervousness, once you know what to do with it, is your biggest ally. It means you care - that you'll work hard, and that your performance will be better than it would be without the fear.

Embrace it. Rejoice in it.

Meanwhile, for me at least, it's on to District in November in both contests - where I'll be continuing to master my nervousness so I can Speak & Deliver...and the judges give me an opportunity to Win Anyway!
Posted by Rich Hopkins at 10:46 AM 6 comments:
Email ThisBlogThis!Share to TwitterShare to FacebookShare to Pinterest
Newer Posts Older Posts Home
Subscribe to: Posts (Atom)