What I Learned From Ryan Avery: 2012 World Champion of Public Speaking

I was asked this question a couple of times yesterday, and it was difficult for me to answer.

Ryan Avery, at the age of 25, won the Toastmasters World Championship of Public Speaking last August - a title I've chased for the better part of the last 12 years, coming up just short as 2nd Runner Up in 2006, when Mr. Avery was probably just a Sophomore in college....!

Yesterday, on his trek moving himself and his bride, Chelsea, to Texas, he stopped to give a free 2 hour speaking seminar about 'How to Give a Great Speech' to 70 local Toastmasters in an event sponsored by our local District 26.

Ryan was energetic. Funny. Humble. Transparent about his failings. Occasionally kept in-check by his wife and his mother-in-law, as most men are. His presentation was well-organized, had a strong power-point that supported his presentation without overwhelming it, and he supported his information with personal examples that kept our attention and interest.

I've been studying speaking methods in one way or another, through Toastmasters, through sales training, through drama, and through my own personal passion for the subject for the last 32 years. Ryan and I both had 2004 World Champion Randy Harvey as coaches, so even that homespun advice was old hat. Even his wonderful motivational review of Simon Sinek's 'What - How -Why' model was familiar to me through the teachings of many other speakers I've followed, most specifically John DiLemme's 'What's Your Why?' programs.

First, hearing all this information in such a compressed and concise manner helped me refocus on a few things I want to accomplish. Writing in this blog for one. Possibly competing next year, for another.

Second, I learned a lot about HIM - and all the hard work he put into winning the trophy in just his first nine months. He talked about the hundreds of hours he put into practicing. Probably more hours that I have in my 12 years competing combined. Six kids tend to dominate my hours - just saying.

Third, I learned that he has probably learned more about speaking and the speaking business in the nine months SINCE winning than in his journey to winning in the first place. His presentation and product table was as professional as I've seen from most any World Champion.

Fourth, I learned that my concept of Win Anyway is more important than ever. When someone wins a championship, a gold medal, a political office, whatever, on their first try - it colors their perspective. People teach what they know - and Ryan teaches visualization, writing goals down, hard work, positive attitude - all within the scope of achieving his victory. He says he refused to let the thought of losing enter his mind for any length of time. For him, it worked out. For 29,999 other competitors, it did not. 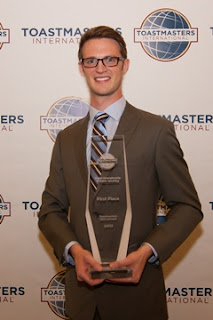 I don't believe for a minute that Ryan thinks that if we all work as hard as he did, if we all follow his track to the WCPS religiously, that we will all win. It's an impossibility. Still, for him, he doesn't know what it's like to lose in that venue - to get so close you can taste it, and then watch another grasp it for themselves.

He was asked what would happen if he lost, and he really had no answer, beyond 'I couldn't have lost'. I think he meant this, at some level, in a 'Win Anyway' kind of way - that by doing his best he couldn't have experienced a loss. He came close to saying this, but always came back to the statement 'I already knew I was the World Champion'.

Fifth, and most importantly, I learned that sometimes I just don't work hard enough. On my speeches, on my life in general. Maybe this is a lesson more appropriate for my Win Anyway blog, but I learned it both from 2001 World Champ Jim Key a few weeks ago, and Ryan, so here it is.

Yes, I may have six kids. Yes, we may have a tremendous amount of medical stuff going on, from brain tumors to Aspergers to Degenerative Disk Disorder to Scoliosis to Neurofibromatosis. But it doesn't give me a pass to stop working towards my dreams. Not necessarily winning the World Championship, though that would be nice, but of really getting out there with my speaking career, of making a bigger difference than I've been making.

Ryan Avery was and is all about playing big. As much as I've accomplished, as many people as I've had the privilege of helping, I've still been playing small.

No. And Yes. No, I didn't learn how to play big from him - I think Tony Robbins taught me that years ago. And Yes. Ryan reminded me that I SHOULD play big, that I CAN play big, and that I am cheating myself, my kids, my clients, my readers, if I don't.

I doubt Ryan intended that to be his message yesterday. Regardless, that's what I learned. Because Ryan Avery can Speak....& Deliver.

'Your playing small does not serve the world. There is nothing enlightened about shrinking so that other people won't feel insecure around you. We are all meant to shine, as children do. We were born to make manifest the glory of God that is within us. It's not just in some of us; it's in everyone. And as we let our own light shine, we unconsciously give other people permission to do the same. As we are liberated from our own fear, our presence automatically liberates others' - Marianne Williamson
Posted by Rich Hopkins at 9:01 AM 9 comments:
Email ThisBlogThis!Share to TwitterShare to FacebookShare to Pinterest
Newer Posts Older Posts Home
Subscribe to: Posts (Atom)