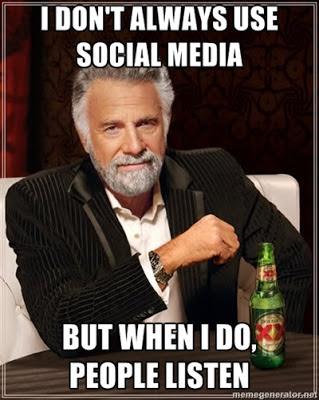 Is Facebook Public Speaking? How about Twitter, Linked In, and all the other Social Media platforms that exist today?

The logical answer would be 'NO' - it's not verbal, its written, right? What we read doesn't have the same effect on us as what we hear, does it? How many of us would stand in front of an audience and read our statuses (particularly some of the political and religious ones) to a live audience? And I mean ALL of them?

So clearly, it's NOT public speaking.

When you read a post, don't you hear that person's voice (or what you think that person sounds like, at least)? They aren't, typically, posting fiction or prose. Statuses and updates are almost always written in Active Voice - for a short blurt of an idea to a long, well-considered (or not) commentary on life. Even the jokes and placards of wisdom we share are essentially us sharing our voice with our followers.

When we reply or comment, surely that is nothing less than public speaking, right?

These social media platforms are very public, and who sees what we 'say' is not always as tightly controlled as we think, unless we have kept our friends lists very small, and our privacy settings completely locked down.

We see stories all the time of athletes, politicians, the Donald - saying something that gets them bad press, suspended, fined, or fired at their job, or even arrested. While most of us aren't going to face issues quite this harsh, as speakers, we still need to consider that anything we 'say' will be used to define us by those listening - no matter how well they may or may not know us, or we them.

1. Know Your Audience. Just as you would for a speaking engagement, consider who your friends and followers are - and how they will perceive what you say. It isn't just your poker buddies who hear your statements that you're a die-hard Tea Partier or a flaming Liberal, or that you spend your life playing fantasy football - it's potentially EVERYONE you've connected with - including potential employers and meeting planners.

2. Control Your Audience. Investigate privacy settings. Create smaller broadcast groups within your larger friendship base. Open a second account for just you and your poker buddies. My wife has one facebook account for 'everyone', with an emphasis on people with Neurofibromatosis, which is the cause she promotes, and a smaller account for closer, more personal friends. Don't let 'friends of friends' see your comments, unless you truly don't care who reads what you may subconsciously believe is only being read by your best buddy. Consider blocking people who regularly cause problems in your conversation streams - we're often judged by who we let be our friends, as well as by what we ourselves say.

Be aware of who you're friending or adding to your follow lists. Don't friend just anyone. Maybe you have 50 mutual friends, but how do you know one or two of them didn't just friend this nutball without thinking, and the next 48 trusted the judgment of the first two? Why are you adding people? Plan the audience you're building - are you just collecting baseball cards of your favorite people? Are you trying to connect with a specific audience? Are you stalking your old boyfriends? Its easier to control your audience when you know and own up to your intentions. 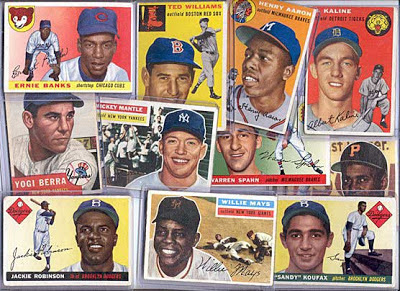 3. Think Before You Status. Would you say what you just typed in front of a crowd made up of everyone of your friends? It's easy to blurt something out in the moment in today's day and age, to type a knee-jerk reaction to life that we would never say aloud in a crowded room. Your facebook wall, your twitter account - they're a crowded room. Stop before you Send - consider the ramifications. Are you adding value, to both your reader and yourself? Be authentic, but be careful.

4. Think Before You Comment. When you comment on Facebook, you are speaking not only to that person, but ALL of THEIR friends as well. Is what you have to say pertinent? Does it add value? Or is it just snarky, argumentative, or plain dumb? Oh, our blurts sound good in the moment, but will they stand up to the scrutiny of being permanently posted for all to see - particularly a potentially unknown audience? Consider sending the person a message instead, or just letting that urge to comment pass. Take a cold shower instead.

5. Ask Questions Instead of Making Statements. By asking your audience what they think about something that you have a strong opinion about, you start a discussion while taking the edge off what might be an incendiary situation, and also get a chance to feel out who may be paying attention. When people read a blunt statement, it can come across as judgment. You may be making a sweeping statement to the universe, but it is read by each 'friend' individually, and some folks take things more personally than others.

6. Free Speech Isn't Free. It's your wall, your account, your life. Far be it from me to restrict free speech. But free speech comes at a cost - and it's up to you to decide if you're willing to pay the price of damaged friendships, misunderstandings, and potentially lost business. Angry at your local football team? Post about how stupid their owner is, and your chances of speaking to any part of that business plummets. Can't stand our President? You've just offended 51% of the voting public. Count the costs of your Free Speech.

7. Be True to Yourself - with Intention. In some cases, being opinionated and contrarian is part of who we are as speakers - Larry Winget and Alan Weiss are strong examples of people who make a living by not caring what people think about what they put out there. But they are also intentional about what they put out there. They keep it consistent with their desired audience values - and consciously trim those they offend out of their audience. If you only want to speak on Christian values, or the benefits of socialized healthcare, or the state of the economy, don't dilute your messaging, but be conscious of everything you say, to keep it on track with what you want to communicate.

Before the comments start rolling in - yes, I have violated many, if not all, of these rules over the years. Maybe even in the last week. How else do you think I've come up with them? 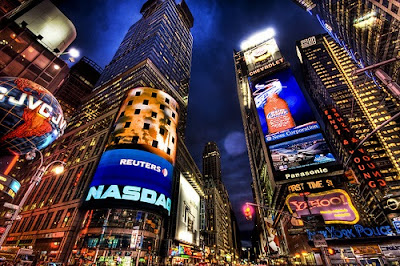 Social media is the most powerful communication tool created in the last decade, and potentially the most destructive. Your thoughts, your VOICE, is being broadcast to the largest audiences you'll ever reach. It doesn't discriminate as it spreads your messages to the masses - it's a megaphone in the mall, it's the megascreen in the Times Square of your social circles. Use it well. Do no harm. It IS public speaking - so be aware of what you Speak & Deliver.
Posted by Rich Hopkins at 6:58 AM 13 comments:
Email ThisBlogThis!Share to TwitterShare to FacebookShare to Pinterest
Newer Posts Older Posts Home
Subscribe to: Posts (Atom)