Winning Anyway in Kuala Lumpur - A Look Back 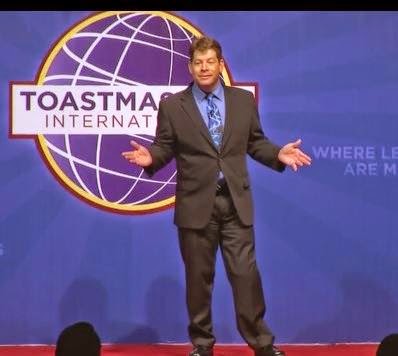 I've been back for about 8 days - and I've had a chance to more fully digest the 2014 Toastmasters Convention, and specifically, this year's World Championship of Public Speaking. Here's the rundown:

FIRST - the results - I didn't place in my semi. I came up fourth in the order, and two of the first three had similar themes to mine - enough so I actually mentioned it in my own speech. My humor fell flat - whether a cultural aspect, the late hour after a day of contests, poor timing on my part, sameness - I don't know for sure - I just know the strength of this speech simply WASN'T there on this night.

Who did win? Dennis Wright, out of Maryland, scooped up Third, Kuala Lumpur's own Palaniappa Subramamian took 2nd (he was 2nd to Ryan Avery in 2012's Finals), and Chris Woo, out of Brunei, took first, punching his ticket to the Finals. Did I agree with these results? Doesn't matter. I do agree that all three were deserving of being in the Top 3, and that my own speech, on this day, was not.

SECOND - I was prepared not to place - but yes, there was a glimmer when I didn't take 2nd or 3rd that I might have pulled it off. I also had strong hopes for my friend Douglas Winter to pull the upset. I had hoped, going into the results, that Douglas and I might at least place. I'm not depressed, as I have been in the past, over the results. My feeling are a bit mixed about competing going forward - but I'll address that further down.

THIRD - The Controversy - Chris Woo, the winner of our semi was the WCPS contestant who 'had no speech' in the Finals. I don't know if he had one he dumped, or just wasn't ready, or what. He apologized long enough to qualify, and received a lot of sympathy and support from the audience. He's only been in TM for six months, and may have just been overwhelmed.

We can all sit back and say 'he should have been ready', or 'he should have just given a speech of any kind that wasn't an apology', or even 'he should have let the 2nd place person in his semi compete' - but at the end of the day, the decision was his (a sentiment Palaniappa, echoed on his own Facebook stream), had no real 'right or wrong' aspect to it, and he will have to move forward with it.

FOURTH - The Finals - they could have been interesting had I won my semi. For one thing, one of my speeches featured the Flash and the Avengers Movie, whereas the first speaker opened with a story about wanting to be Green Lantern (who is Flash's best friend, fyi). Don't know how I would've handled that one.


In addition, Kwong Yue Yang used his speech from 2011 - which won him the semi he and I competed in together, to win 2nd place in the WCPS (for the 2nd time, as he took 2nd to Jock Elliott in 2011). I don't know if I would have liked losing to that speech again, and wonder if I could have beaten that speech given a second try. What if, right?

FIFTH - the winner - Dananjaya Hettiarachchi from Sri Lanka, which had a HUGE contingent at the conference supporting not just him but Balraj Arunasalam, who ran for 2nd Vice President of Toastmasters, and won, was a pretty clear cut winner by my own judgement, as well as the audience reaction. I believe Kwong had a puncher's chance, especially if he'd been later in the order, but I think the right speaker won on this particular day. 3rd place winner Kelly Sargeant gave a fun and timely speech that stood out, despite her theme being touched on by a speaker later in the order.

I've often said that if you run the contest the next day, or mix the order, or change the judges, the results will change as well - it's that close. This year, I don't think it was that close. Kwong might have won twice if the contest were run 10 times - but Dananjaya would have won all other 8 times. 3rd place may have varied wildly - the rest of the speeches were very close in quality of message and delivery, though Chris pretty much took himself out of the running with his choice not to give a 'contest speech'.

LESSONS for NEXT TIME - if there's a next time:

A. No recycled speeches - I've made it to the semi's three times ('09, '11, '14) without writing a new speech. Mostly because I've moved so much. Clearly, while it's been successful to a point, it's not enough. It's time for me to build some new material - which may take a year.  Or five.
B. No fund-raising - if I can't pay my way, I won't compete. I have no real qualms with fund-raising. It does take time and energy, however. I'd also like to be in a financially safe place the next time I compete.
C. No roommate - I was blessed to room with my District's Lt. Governor of Marketing, Darryle Brown, but I like my privacy.
D. Three speeches, not two, regardless of the contest requirements. What wins in your District won't necessarily win in the semi-finals. The audience is just too different. I don't know how many of this year's winners used their District Speech - I just know I probably won't do so again.

A. My Wife's Unwavering Support :)
B. Meeting so many friends, and so many new friends.
C. Dinner with Douglas Kruger, Conference Speaker, Car Enthusiast, and owner of the most sonorous voice I've ever heard.
D. Coffee with Doug Winter and Caroline Lyngstaad, both fellow Semi-finalists from my heat, on Saturday. Nothing like getting three motivational speakers together to encourage each other after losing!
E. My District's support - with funds, feedback, and friendships.


F. Pictures with so many old and new friends, including Kingi Biddle :)
G. Safe travels to and from, and the opportunity to watch a BUNCH of movies I missed in the theatres, including The Chef, which was tremendous.
H. The knowledge that my appearance in SPEAK the Movie matters to so many, and that Win Anyway has a worldwide reputation.

Overall, while the end results weren't all I'd hoped, indeed, there have been, and will be, many other victories involved. I went out there, I Spoke, I Delivered - and didn't chase the wrong trophy.