Is it You Speaking, or Your Surrogate? 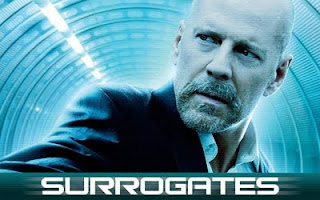 Who are you when you take the stage?

Last night I took Kristi out to see a movie called Surrogates. Its a B movie at best, but put forth an interesting premise. At some time in the near future, technology creates robots that we can control - in fact we 'inhabit' these robots, living our lives through our 'surrogates'. We see through their eyes, talk through their mouths, as our human selves sit in safety, hooked up to brain sensor machines that allow us to completely experience the world through our idealized, yet mechanized, counterparts.

It's marketed as a way to keep people safe from harm. Why go out in the world and risk getting hurt? Living is just too dangerous. In the world of this movie, crime is drastically reduced, and people are content to live vicariously through their custom-made counterparts.

Of course, with Bruce Willis in the lead role, it quickly becomes an action flick, alternating between Sci-Fi philosophy and Save the World heroics. 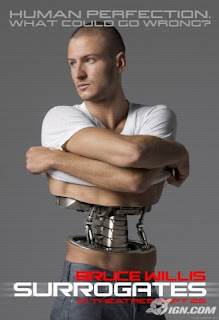 If you could, would you rather speak through a robot in front of an audience, instead of going up there in person? Now, realistically, we can't do this yet, and if this were the movie, you would be a robot speaking to an audience of other robots.

Speakers can, however, fall into a 'surrogacy' trap. It is easier for some to create a 'speaking persona' - a style that is separate from your true self, when you are on stage. In advanced cases, a speaker literally turns into an actor once they get in front of others.

This approach may seem to make sense - after all, speaking in front of a group takes skills that are different than speaking conversationally. Or does it? I would suggest that speaking in front of a group should be more of an enhancement of your normal speaking style. When you start turning into a different person on stage, you risk losing your audience. This hurts both on stage, and when you turn back into yourself the minute you walk OFF stage.

I'm often told people can see me 'turn on' when I hop onto the contest stage. My energy level rises, my gestures get bigger, and I enjoy every moment. But I have worked over the years, by watching videos and listening to recordings of myself, to make sure I don't go too far into performance mode.

Creating a 'speaker's voice' and a 'speaking persona' may seem like a good idea. A way to protect yourself from the realities of speaking in public. But ultimately your connection will weaken, your authenticity will fade, and people will stop hearing your message as they watch your 'surrogate character' go through the motions on stage.
Posted by Rich Hopkins at 10:21 AM
Email ThisBlogThis!Share to TwitterShare to FacebookShare to Pinterest