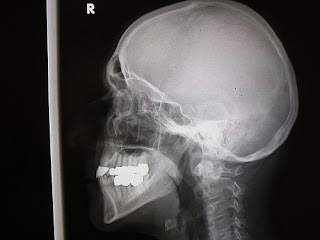 photo by erix!
Yes, it's true - your audience can see right through you.
No matter how strong a speaker you are, how well-crafted your words, precise your gestures, or perfect your props, nothing will conceal a lack of authenticity by a speaker, even if you are aware of it and actively working to override it.
At the climax of my training in August, I gave a final presentation of our sales script. During the evaluation, the VP, my boss' boss, suggested it didn't sound like I believed in the product. It was all I could do not to glibly fire back "I don't!"
This overall lack of belief played a major role in my decision to leave that particular situation, in combination with the time away from my family.
Even as I was giving my all on stage, inside my head the words "yeah, right" and "if you only knew" echoed during various parts of the presentation. Even though people still bought, they didn't buy at a level that they would have if my authenticity had been higher; if I'd believed for myself what I was saying to them.
How X-Ray Eyes & Ears Work
A. Tone of voice - forced sincerity, even well-practiced, is a tone of voice that we're trained to pick up on subconsciously, if not consciously. We may choose to ignore it, but we hear it.
B. Energy level - the longer the presentation, the harder it is to maintain energy throughout. If it's a short speech, too much energy may be evident as over-compensation.
C. Eye-contact - it can be tough to look at folks in the eye in general - it just gets tougher when you think you're selling them a bad deal.
D. Lack of focus - with so many things to keep track of as a speaker, if focus is splintered by inner contradictions, plenty of things will go wrong that might have been caught otherwise. The speech itself, from delivery technique to transitions to humor will often suffer as well.
E. Sarcasm substituting for humor - it can be easy to let sarcasm slip through and excuse it as an effort to be funny, and connect with the audience. It does connect, but it connects them with the reality of our feelings.
F. Vamping - working to get a laugh or a reaction from the audience in an effort to validate the performance. After all, if they laugh or react as asked, we must be doing something right.
Often we fool ourselves, believing that we're successful actors if people are buying what we're selling. What we fail to realize is that often people aren't buying what we're selling as much as they are buying what they came to get. If they were already convinced, or if the basic benefits match their expectations, they'll often buy despite the presentation. So we'll assume we're doing fine, and just need to pump up the enthusiasm or tweak the verbiage, instead of looking in the mirror and accepting the age-old truth that 'the first sale is to ourselves'.
As long as we're only acting, we'll never truly inspire or persuade anyone. We might get great comments on our skills and content, but the long-term results will not be as strong as they would be if driven by strong belief and conviction.
Three Quick Asides:
1. Belief and conviction does not have to equal truth - plenty of us wholeheartedly believe things that may or may not be true, and can successfully persuade listeners to agree, as long as we believe it to be true ourselves, first.
2. Our belief doesn't have to be anyone else's. The product I was selling has been successful for many years, and others wholeheartedly believe in it. The fact that I did not does not invalidate the product, nor does its success invalidate my feeling about it. I'm not a Mountain Dew fan either, but plenty of people I know are wildly passionate about it.
3. Many of the above delivery issues will be seen in beginning speakers. They may believe in what they are saying, without believing in their own ability to deliver the message - a much easier issue to fix.
What are YOU saying? Are you speaking for yourself and your beliefs, or someone else's? Are you speaking for money, or speaking your truth and creating money as a result? If you don't truly believe in your messages, you're not fooling anybody, except yourself. And I'm willing to bet you aren't even fooling yourself.
If you do believe your own messages (and most of you do), how can you make it even MORE authentic? I'll take a closer look at that challenge later this week.
Today, take a moment and look at your own insides. Tell yourself the truth - YOUR truth - not your companies, your coach's, your family's, and be prepared to take action, regardless of your findings. Your belief is the difference between being someone who Speaks, and someone who Speaks & Delivers.
Posted by Rich Hopkins at 9:24 AM
Email ThisBlogThis!Share to TwitterShare to FacebookShare to Pinterest