The Climax - The Make or Break Moment in Speaking 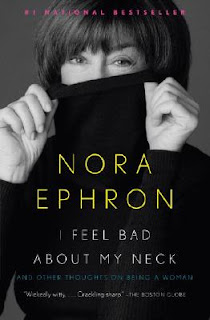 I was in the mood to laugh this weekend - so I went to a Toastmaster's Contest. Six speakers came up and entertained us with stories about antique dealers, mouse-hunting, stealing motorcycles, rhyming jags about the fear of public speaking, and dogs that are smarter than humans. The winner, however, got the audience roaring with her talk "I Feel Bad About My Neck".

For those of you going "Hey, that's a Nora Ephron book!", yes, she referenced it and Nora, both for attribution and repetitive humorous effect. She built up her speech by following the outline of the book, telling us what Nora Ephron wrote, and then finding the truth in it, to her horror, in her own life and the lives of her friends. Each tidbit was followed by an epitath - "I'm just like Nora!"

For those of you who don't know, speeches in Toastmaster contests tend to be 5-7 minutes long - comparable to a unit within a longer keynote. These speeches, when approached correctly, can be used to build a longer speech, and each need to contain a beginning, middle, climax, and conclusion. The only real changes going into a longer format are the additions of transitions from unit to unit.

Finding the climax of a speech can a challenge, particularly when the goal is humor. What YOU think will get the audience going may not be what actually works, and what you don't think will work may get them laughing harder than you imagined. And each audience is unique, so your humor may not work from performance to performance. Seems like you're stuck in a no-win, right? Yes, and No.

Three Keys to Identifying Your Climax

1. Build with the Climax in Mind - you know what you want the audience to do, how you want them to react. Build your speech with that purpose in mind. Put all your stories/points on the table and move them around. Do you have to tell them in a certain order? How does your impact shift if you tell your last story first? Which piece leads them closest to your end result? Are all of your pieces even necessary? Do you have better stories you can draw from?

2. Test, Test, Test - a good idea for most any aspect of your speaking. Toastmasters is a great place to do this - low risk, supportive audience. If you are going to throw out a clunker, better here than someplace it can hurt your professional reputation.

3. Be Ready To Take the Forks in the Road - by putting them there ahead of time. Did you just get a major laugh? Did the audience just respond to you in a way you didn't expect? Be ready to adjust. Perhaps the time to conclude is now. Perhaps, instead of tossing in that extra line, its time to transition to the next point. While there can be some great toppers, and your next story may bring them even closer to the state of mind you're aiming for, use that all important pause while the audience is reacting to decide which direction to go. If you put the forks there ahead of time, you'll always be ready for them.

What I noticed in the winner's speech was that after several points, and some strong titters and giggles, she had a line that induced all out laughter. Goal accomplished, and she was in the lead at that point, contest-wise (with four speakers to go, I couldn't give her the prize quite yet (and no, Toastmasters, I was not a judge that day)). She had already won the crowd over with her timing, tone, and facial expressions, but this line was a clear climax. This was confirmed when, instead of going straight into her conclusion, she went for one more point, one more laugh, and it flopped. The ever-dangerous anti-climax. She then finished up, and left the door open for the next few speakers to win the contest.
In the real world, mis-identifying your climax can result in slowing your momentum, losing your audience, and causing them to forget the point you just made. In the worst cases, it can cost you credibility, and even send your audience in a totally different direction than you intended.
For our Nora Ephron twin, it didn't end up costing her anything that afternoon. It might at the next level though. So if you know her, send her by this post. For you, it could cost a lot more, so take note of where, why, and how your speech will climax. The go out and Speak....& Deliver.
Posted by Rich Hopkins at 12:15 PM
Email ThisBlogThis!Share to TwitterShare to FacebookShare to Pinterest