Starting Your Speech in the Middle

You've only got a few seconds. If you don't grab their attention with something that matters, the audience will turn you off before you can say "Angry Birds".

There are several ways to get their attention - from asking an opening question to starting with a startling statistic to saying something controversial or shocking. I covered these in 2010, in "Grabbing the Audience's Attention: Myth or Method".

Normally, you'd open by saying how important relationships are. You might even ask a question: Have you ever had a horrific relationship? Then you set up the rest of your speech and start telling stories.

What if you moved us to the middle, using dialogue? Shout: "Get out of this house this instant, or I'm calling the police!" What is the audience thinking now? Whatever they are thinking, at least they are thinking. They are instantly drawn in, to find out the context of the statement. Now you are free to go backward and forward through time to build context, make a point, and bring your audience to your conclusion. 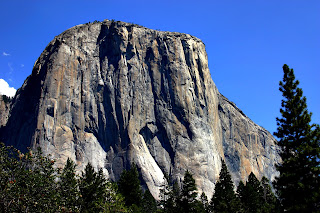 A typical start to this speech might be a statistic - "40,000 people a year die in car accidents". Then you bring this into a comparison with your personal story of climbing El Capitan, and continue into your point about the process of taking risks. Not bad, but not terrific.

Instead, consider this: As if talking to yourself, say "What am I doing, volunteering to climb up a 3000 foot rock formation, with only a rock and my idiot brother-in-law between me and certain death?" Pause, look at the audience. "That's what I was thinking. What I said was AAAAUUUUUGGGGGGHHHHHHH!" Then explain the situation - you had a sudden drop, you hurt yourself, you fell to your death, whatever. You get us wondering, then you surprise us. Now you can take us wherever you want to, even up El Capitan!

Starting Your Speech in the Middle provides an added bonus to your speech, as well. It cuts out all temptation to meander around at the beginning with thank you's and stories about the traffic on the way there and how you knew the company president in college. It cuts to the chase, which is what you audience wants, and what will make your speech more memorable, more effective, at its completion.

Is it uncomfortable? Sure. Especially the first few times you do it. But so was speaking, once upon a time. Experiment. Practice. Just don't wimp out. The more powerful your opening, the more power you'll have over your audience.
Posted by Rich Hopkins at 9:35 AM
Email ThisBlogThis!Share to TwitterShare to FacebookShare to Pinterest