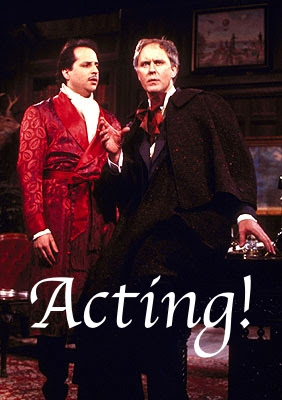 Have you ever watched a speaker and wondered if he knew you were even in the room?

It can be easy to go into acting mode as a speaker, especially if you've put a lot of work into your presentation. To start, you're on a stage, already separated from your audience. You know what you want to say, how you want to say it (whisper here, yell here), what gestures you want to use, and you don't want to miss a practiced beat.

I've watched many a terrifically constructed speech packed with wit, pathos, action, and a strong calls to action, fall completely flat. They were in full performance mode, but forgot we were in the room - putting up a virtual television screen that separated us from them. Had we watched the speech at home on our wide screen HD with stereo sound, we'd be closer to contentment. What we want from a speaker in person, however, is not just a message, but a connection, a conversation. When presenters go into acting mode, we leave empty, even if we laughed and cried.

Ultimately, this type of speaking is more about the speaker than the audience.

It may be about the speaker's fear. Going in front of an audience can make you feel like the Emperor with no clothes. Acting can be an emotional robe, protecting you from the audience, while ultimately separating you. Speakers who aren't comfortable with their message, or fear pushback from their audience can put on an act in self-defense. Unfortunately, once you're on, you're on regardless. If you're going to go ahead and speak, commit to the moment, and let nothing stand between you and your audience. Still, I advise wearing a suit.

Acting can come from too much or too little experience. If you aren't familiar with your message, you'll be so wrapped up in getting it right, you won't connect. If you are TOO familiar, you risk going through the motions, perhaps unsure of which audience you're even in front of today. Speaking often is great, but not if you're already mentally out of town when you speak.

It may ALSO be ego. The speaker may be so into themselves that they care more about looking good on stage, more about being remembered as a great speaker than a great communicator. If you're one of those, you're probably not reading this. But it can be easy to slide this way when we first start getting good reviews and loud, perhaps standing, ovations.

My initial training is actually as a stage actor. Beyond a high school speech class and a horrifying oral book report in the 7th grade, I didn't do much public speaking. Ironically, I was taught that GOOD acting meant connecting with the audience. Not in the same way a speaker should, but a connection through an authentic performance. Which means that not only is a speaker who is acting without connection not speaking well, they technically aren't even acting well!

- Blocking (move stage left) as written VS. movement (step towards the audience to strengthen statement) out of natural intent and authentic emotion

- Dialogue stays on stage VS. dialogue with the audience

- Little to no eye-contact VS. intentional, specific, and continual eye contact 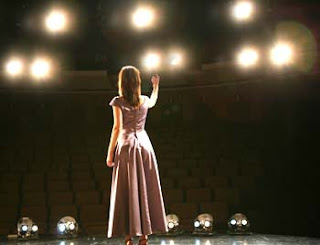 These are generalities, of course. I can already hear my theatre friends shouting exceptions. Stage acting can certainly break the barriers between actor and audience, and some performances can transcend the art form. And yes, there are speakers who speak as George Washington or Winston Churchill - though I would submit that is really just acting, not being a speaker. What's important to understand is that the intent behind effective acting is almost always different than effective speaking. It doesn't lessen either discipline, but clearly separates the two.

I'm not even saying acting in a speech is altogether inappropriate or ineffective - as long as it's the temporary transport mentioned above. It's okay for us to get involved in your stories, as long as they lead us back to our reality.

As speakers, we are not on a three camera soundstage with an audience being told when to laugh. We are not bound to a chiseled-in-stone script. We are not under the thumb of a director. We are free with our message, and bound only by our responsibility to our audience.

It can be scary as our we nakedly share our ideas with actual human beings - with both sides aware of our vulnerability. The reward, however, when we break through the imagined glass screen, and know the audience is in tune with our message, in sync with us as speakers, goes beyond an appreciated performance. It becomes an attitude, a habit, an action - an idea that goes beyond the stage and take corporeal form within the lives of your listeners.

Save your acting for the community theatre - the speaking stage wants you, not your character, to Speak & Deliver.


Posted by Rich Hopkins at 7:45 AM
Email ThisBlogThis!Share to TwitterShare to FacebookShare to Pinterest