A couple of weeks ago, I was booked to speak at my Advanced Toastmasters Club, Professional Presenters. Out of the three speakers, all but myself had dropped out, so I was looking forward to an extended practice of my speech about how to structure a keynote speech.

About halfway through the day, my right foot (had to be the right foot, since, after all, the left foot is carbon-fiber...) started hurting a bit - the sole/arch would protest with each step. It was bearable for walking, though I had to have my client hold my arm as I went down the stairs leaving our appointment, since their were no railings to rely on.

I headed to the gas station, and the pain was already worse. I picked up some Alleve, despite the outrageous 'convenience store' price, and a Monster drink, and took my typical 1000 mg, to attempt to stop the pain in the ensuing three hours before showtime.

An hour later, of course, the Monster took it's toll, so I stop at a grocery store to use the facilities (both my client and my club were a good 45 minutes away from home, so going home was not an efficient use of time or gas) but I couldn't make it more than a couple steps away from my car.

Cancel, and go home? Or tough it out?

I drove to the location, and still had 90 minutes til showtime, maybe 60 til someone showed up to help me walk inside, and, hopefully, to make it to the restroom in time! Meanwhile, I'm sitting in my car alternating between practicing my speech and playing Candy Crush on my phone.

I've had to deal with pain, particularly 'spontaneous' pain much of the last 5 years. Sometimes on the road, when I worked for Ambassador Programs and had to lug equipment around with me, and could barely stand in front of the parents I was trying to convince to send their kids overseas. Sometimes local, such as my own club last month when, by the end of the meeting, my back cinched up suddenly, and I needed two other Toastmasters to make it out of the building, and a third to drive my car up the hill to me.

In Toronto last year, when speaking for District 60 and 86, my Sciatica was acting up so bad I could barely walk each morning. I missed several Conference events just because I couldn't leave my room. I was able to medicate and stretch just enough to make it to my own keynotes, and a contest or two, but much of the time I was stuck. By the last day, I was almost unable to make it to the car to be driven to the airport - I walked against the wall, hunched-over, taking baby steps down the corridors. 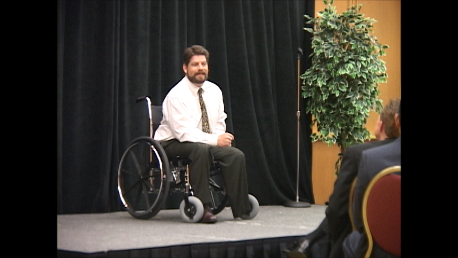 I've given speeches on crutches and in wheelchairs. I've given speeches on drugs - heck, I was barely conscious during one morning District Conference Table Topics Competition in 2011 - I was in so much pain the night before I had taken nine Vicodin through the night to be upright the next day. I thought I might have to drop out of that evenings International Competition once the drugs wore off, if the pain returned. It didn't, and I won that evening. (Took 2nd in the morning - perhaps my drugged stupor made my topic that much more interesting - I don't remember much about it to this day).

My first real challenge with 'The Show Must Go On'? December 1986, the day before the premiere of Towards Zero - the first play I was ever in in college. I had a big part, and after dress rehearsal, I had NO VOICE. And we had NO UNDERSTUDY. I was sick, and I had no idea whether I'd be better the next day. That's the first time I was given the advice not to whisper, as it would hurt my voice. Just talk, or better yet, DON'T talk. I was quiet the next day and POOF, my voice was ready for the big night.

Back to me in the car squirming, waiting for someone else to show up...eventually someone did, and I was able to last long enough to get inside, take care of things, and then give the speech, propped up against a chair put in reverse, so I could half-sit on the headrest. I had hoped for a bar stool, but no such luck. The speech was well-received, and, had I wimped out and gone home, they would have no speakers that night (though one hardy soul volunteered at the last minute with a pocket speech). With six guests, that would have been a disappointment for them and the club, and for Toastmasters in general.

Now, I have occasionally missed a club meeting because of pain - no question. However, when you're paid to speak, or brought in from out of town, or the only show that night - I'm a strong believer that the show must go on. If speakers who are paralyzed can go make 20,000 bucks for a keynote, I'm not going to wimp out over a bad back or foot. Or a cold, flu, or much else that isn't going to kill me within a short period.

Take precautions. In pain often? Have your meds ready. Keep crutches handy. Be willing to ask for help. If you half to crawl on stage - tell the introducer to say something about car accident you had on the way in, or use it in your opening comments. If you have something others can catch - bring the hand sanitizer, and stay in the wings until showtime.

Remember, you can't Speak & Deliver if you're wimping out at home on your couch watching re-runs of Big Bang Theory.

Posted by Rich Hopkins at 12:07 PM
Email ThisBlogThis!Share to TwitterShare to FacebookShare to Pinterest