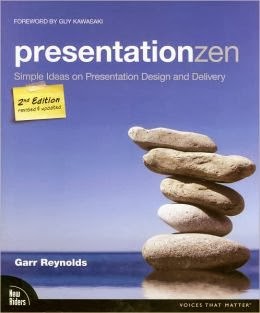 I may be the one speaking coach in the world who hadn't read Presentation Zen yet. At least until the last couple of weeks.

I have an excuse, though. I HATE PowerPoint. I rarely use it. So why read a book about it.

Funny thing...about half my clients DO use PowerPoint in front of audiences they're training, and can't imagine life without it. So into my list of 52 Books in 52 Weeks it went.

Before my clients freak out, wondering whether what I was telling them before I read the book was right or not, don't worry. I've read enough articles, most of which reference Garr Reynolds book, and put together enough presentations, and, oh yeah, have that degree in Graphic Design - so most of what I read was simply confirming what I already had gleaned over the years. 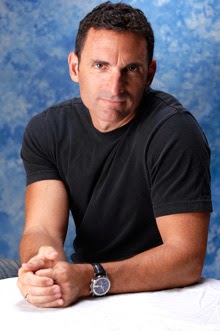 I am very glad, however, that I did read the book itself. (Not that I could have listened to it on Audible, as I often do - I think it would lose something...) It takes simplification of slides to a degree I've been promoting, but rarely convincing people to buy into. It shows off how effective simple slides can be, and puts the emphasis back where it should be - squarely on the speaker.

His approach is radical to many - a slide-deck that seen alone would likely make no sense at all, but is still supportive, in fact, integral to the message. He doesn't set hard and fast rules, but makes wonderful arguments for clean, image heavy slides, vs. the 'Slideument' as he calls it, a document in slide form that may as well replace the speaker entirely
It's a quick read, not terribly copy-heavy, as you might expect a book promoting copy-light slides to be. It shows more than it ever tells, even though Reynolds ideas and experiences fill the book up with energy, creativity and insight. The design of the book itself is more of a coffee table tome than a how-to guide. All the more Zen, I suppose.

He's a bit too in love with Steve Job, perhaps, but he also offers views from Nancy Duarte, Made to Stick, and numerous other sources which are either summarized, or, as articles, wholly included in the book. He also references Jazz, Japanese art forms, and of course, Zen itself as guiding principles not only in slides, but in presentations as a whole.

While he mentions Keynote (Mac version of PowerPoint, essentially) and Prezi - he doesn't go into the art of using Prezi, which is a bit different in nature to the old-fashioned slide programs. Perhaps another book in the making?

Apparently, there are updates in the version I purchased, so if it's been awhile, it may be worth buying the more recent edition.

Bottom line: if you want to learn the right way to do slides - read the book. Often. Or find a coach that has.

5 Stars out of 5. Makes me want to go right out and build a slide-deck. Maybe.


Posted by Rich Hopkins at 12:47 PM
Email ThisBlogThis!Share to TwitterShare to FacebookShare to Pinterest