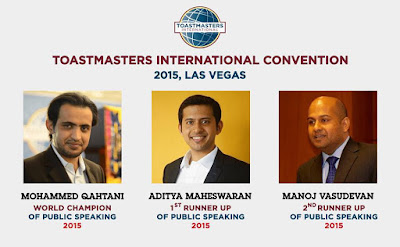 Yeah, congratulations and all to 2015 World Champion Mohammed Qahtani. I was watching here in my office in Colorado as you literally smoked the competition.

But this post is for the rest of you. The losers. That's all 95 of the rest of you - because everyone knows taking 2nd just means you're the first loser, right?

In case you don't know, I know how it feels. I've lost all 12 times I've entered the International Contest. I've lost at club. I've gotten lost going to Area, and not showed up. I've lost at Division, 5 times (three of those, I was lucky enough to go to District, anyway). Lost at District this year, for the first time - because I went OVERTIME. Lost at the semi-finals 6 times. Lost at the Finals, twice. The highest I've ever made it? 3rd Place.

And let's not even talk about all the losses in Table Topics, Evaluation, Humorous and Tall Tales. Because, frankly, I just don't like to think about them. 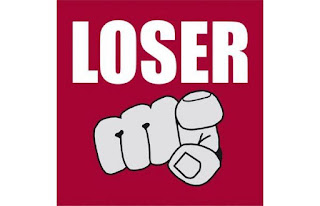 And I know how you feel. Especially when people come up and say wonderful things like:

'You gave a great speech'
'I had you placed in the top three'
'I thought you should have won'
'If you had drawn a better speaking order....'
'The winner just had a lot of support in the audience'
'I just don't understand the judges'
'Your message meant so much to me'
my personal favorite, from 2006, when I took third in the Finals 'You finished right where I picked you!'
and, finally, one I use myself 'You're a winner anyway!'

(Editor's note: One I can't identify with, but sympathize with is: 'Toastmaster judges are just biased against women'. But let's save that for another day.)

We hear that. We nod. We smile. We say thanks. And we even try to believe it. But for awhile at least, most of us are seething just a little bit inside. Wondering what we did wrong. Thinking about what we aren't going to get to do. Questioning the judging, our writing and delivery, our coaches, and perhaps even whether or not this whole competition thing, or even Toastmasters thing, is even worth it anyway!

Time to SNAP OUT OF IT.

The contest is about finding a CONTEST WINNER even more than it is about finding the best speaker in Toastmasters. Luck of the draw & luck of the day both play strongly into the outcomes. Even those champs that say great things like 'I already knew I was going to win because of the work I put in' or even 'Make the only question be whose in 2nd place' could have fallen to different fates if things had fallen slightly different.

And yes, I'm fully aware of the maxim 'The harder I work the luckier I get'. I'm in favor of both hard work AND luck.

You just spoke to audiences of several hundred (or a couple thousand) people on a great stage (or two), with full mics, lights, and cameras. A far cry from your TM meeting back home, I bet. You can pull some sample video without breaking copyright law, and grab a few screenshots here and there to promote yourself, right?

You just spent a tremendous amount of time (hopefully) honing your craft, speaking in front of new people over the last few months, getting coached, and dreaming of 'what if'. That makes you A - a much better speaker than you were a few months ago. And B - aware of the 'what if' you want - which you can pursue without a trophy, in virtually every scenario. Whatever you want to do, you are closer to it now than ever before. Don't chase the wrong trophy.

Third - No whining. No believing the excuses you hear made for you. Don't blame the judges, or the speaking order, or the crowd, or the organization. Don't blame...whatever you want to blame. Even yourself. You did your best. They did their best. Can you do better? Fine - accept that, and do better next time. But the more time you spend whining, the less time you spend getting better. Take it from a recovering whineaholic!

Fourth and Finally - You're only a loser if you choose to identify as such. I give entire keynotes about this concept. Find your victories. Celebrate them. Build upon them. Whether you ever enter another contest or not is inconsequential. You've done something tremendous this summer/winter. Don't minimize, don't regret it. Learn from it. Be better because of it. Give more to your audiences because of it. Give more back to Toastmasters because of it.

You may not be the World Champion of Public Speaking - but you're damn good. Don't chase the wrong trophy, continue to Speak and Deliver, and WIN...Anyway!

Posted by Rich Hopkins at 8:23 PM
Email ThisBlogThis!Share to TwitterShare to FacebookShare to Pinterest