How's that for a charged title?

It could just as easily be this one: Why Asians Almost Never Win the World Championship of Public Speaking

Or: Why Speakers Over 7 Feet Tall NEVER Win the World Championship of Public Speaking

Or my favorite: Why a Father of Six with a Fake Leg has Yet to the World Championship of Public Speaking

1. Order bias (1st, 2nd, and 3rd went to the last three speakers, with the winner, Mohammed Qahtani the last speaker of 10)

2. Gender Bias - no women even made the Final Ten.

I'll save order bias for another day - there's a lot of data crunching that goes into that, and it's not something we can readily fix. Women winning the Championship, however, is something I can talk about. At least from a biased male point of view.

Let start by mentioning a couple major aspects of my own competitive career. First, I have been on the losing end to women several times. At club. At Division (twice!). At District. At the Semi's. And even in the finals, losing to the last woman World Champion, the late LaShunda Rundles.
So I get a little amped up when I hear people accuse Toastmasters of being biased against women.

Yes, we've only had four female champions since 1973, when women were first allowed in Toastmasters. We've had a small percentage of women in the Finals in the first place, but we've had more than a few place in the top three. Mary Cheyne, Angela Louie, Katherine Morrison, Kelly Sargeant, to mention some from the past decade. But still, a small percentage overall. Indeed, it isn't even that unusual for the Finals to be all male.

So - there's a problem. Supposedly.

The list I've heard from people is endless. It all adds up to women are...well...women!
Yeah, well, SO FREAKIN' WHAT? Men are also...well...MEN!


Flawed. Bad beards. Bad dressers. (I heard this year's world champion criticized for having too small a suit, and an 'unconventional shirt'.) Terrible speech topics. Too loud. Too animated. Too cocky.

Are they as heavily criticized as women? No. In fact, dressing for the stage is far easier for the average male, and no, we don't usually get penalized for being too fat, too skinny, or even being just plain ugly. I do believe society in general is far more critical of women than men in almost every way. That can't help but seep into judging. If we are going to call that judging bias, then yes, it exists, and no, it shouldn't.

Let's face facts: more men lose in the contest that women. It's true. I think there were 17 women in the semi's this year. That means, out of 96 contestants, 10 men won, 17 women lost, and 59 men lost. Unbelievable. All those poor men. And several of those women placed, making it even worse for the men. Oh, the humanity!

Therefore, IF there's bias, it's more on the lower levels, right? Gotta be. But then I hear the problem is actually that not enough women enter, lowering their odds in general. Like the speech competition is a slot machine or a dice game. Yes, luck enters in to a degree, but it isn't really an 'odds-based' competition - it's a quality-based competition. Out of 10 speakers, we cannot objectively say each speaker has a 10 percent chance of victory. 'Chance' is directly countered by experience, talent, and performance. Otherwise we could just draw the winner the way we draw for order.

Wait a minute, Rich. Are you saying that women aren't good enough speakers in this competition?

Well.....Yes. Yes I am. And neither are the literally thousands of more MEN speakers in this competition than women. The competition starts with 30,000 contestants. Based on 18 percent of the Semi-Finalists being women, 4100 of the 30,000 are women. That means there were 25,890 men who weren't good enough EITHER. Holy freaking COW!

See - other than a tiny percentage of speakers every year, NONE of us are good enough. Because it's a competition. With ONE winner. ONE winner every step of the way. 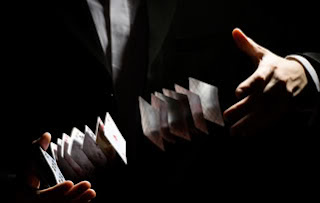 Put all the finalists in one semi, and all but one loses, and the Finals is totally reshuffled. For instance, last year, Joe Grondin and James Jeffley were in the same Semi-Final. Joe had been to the Finals before, James was a first year Toastmaster. James won. This year, they were both back, in separate Semis, and both won and went to the Finals. Neither placed. Luck? Maybe. Odds? Maybe. If you really want to game the odds, put all the women in one Semi-Final - yeah, there's a solution built for rioting.

The reality is, allowing a little room for human judging error, that the 10 male Finalists this year simply HAD THE BETTER SPEECH than any of the other women and men in their contests from club on up. Except the champion, who took second at District, but that's a whole other cool and inspiring story.

Could a woman have won a Semi in 2015? Sure. Different set of judges, perhaps. Put them in a different heat, perhaps. The only woman I watched this year who took second that I personally thought could have won her semi was beaten by a speaker who finished in the top 3 of the Finals - so we're really splitting hairs with that one.

Most of you aren't going to like this, but the answer for women is the same answer I have for me. We aren't winning the World Championship of Public Speaking because our speeches, while stunning, spectacular, and skillful, are not as stunning, spectacular, and skillful as those who beat us. Even if they only beat us by a single, measly point. One measly point is enough.

What can you do about it?

Write better speeches. Practice your delivery more. Study what wins, and what doesn't. Don't make excuses. If you're charged up about a woman winning, and know one who should be competing but isn't, convince them to compete! If you think judging stinketh, then volunteer to give judging training - I'm helping with judging training in my own district in just a couple days!

Find coaching - be it from a man or a woman, or both. I know Olivia Schofield, 2011 Finalist, and Chelsea Avery, coach for 2012 Champ Ryan Avery, have started VocalWomen specifically for coaching women speakers. There's no shortage of women coaches available, in Toastmasters OR the real world. I coach women speakers all the time, both in the contest, AND the real world.

Finally, keep in mind two truths. First - you can't control everything. The judges, the audience, the other speakers. Your Sgt. at Arms. Your Toastmaster. The stage size. The microphone. You can only control you, your content and your performance. Focus on winning what you can control.

Second, losing isn't an indictment. It doesn't mean you're not a great speaker. Women, it sure as HELL doesn't mean you aren't as good as a male speaker. All it means for you, and the men, and that father of six with the fake leg - is that we didn't have the best speech that day, in that moment, for those judges. We, and eventually 29,999 others - we ALL LOSE.

OK - I can feel the death stares. Send your hate mail. I'm not a woman, so I don't know what's its like, and I don't appreciate 'male privilege', and I shouldn't even be writing any of this. I know. I'll probably never get another 1st place vote from a woman again. Or a man, for that matter, because, after all, at the end of the day, I've actually just said more of them apparently suck at speaking in the contest than women.

It's almost enough to make me think competition is a bad thing. Almost.


Posted by Rich Hopkins at 11:28 AM
Email ThisBlogThis!Share to TwitterShare to FacebookShare to Pinterest