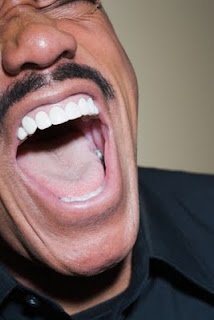 It's no longer enough to speak to audiences - now they expect us to make them laugh! Straight oration has been out for years. If you're not funny, the audiences end up laughing AT you, instead of WITH you, so the time to learn to be funny is now.

One of the easiest ways to build humor into your messages is by using Catchy Cultural References, as its described in "Go Ahead and Laugh".

Most of us have been brought up on a steady diet of television, movies, music, and have an emotional response whenever a specific reference is made. What do you think of when I mention Love Boat? Hulk Hogan? American Idol? Your mind instantly brings up emotions and opinions based on your experiences with each. Even if you never watched an episode of The Apprentice, you've likely heard of Donald Trump, and his catch phrase from the show "You're Fired" (and his accompanying snakebite hand motion).

Finding parts of your speech that can connect with Catchy Cultural References gives you an opportunity for humor, strengthens your connection with the audience, and keeps the rhythm of your speech from flattening out.

Example: In Dan Weedin's speech "Stop!", in which he describes the adventures of driving with his wife and newly driver-licensed daughter, he uses Star Trek as a Catchy Cultural Reference. With statements such as "Boldly going where many parents have gone before", "Make it so", and suggesting he was just "trying to save the Enterprise", he generates humor, adds an emotional link for the audience to a general reference beyond his experience, and creates self-deprecatory comedy in both his method and his choice of references. "Stop!", and a complete analysis of the humor used within, is one of 11 speeches included and dissected in "Go Ahead and Laugh".

References can be used to create continuity in a speech, where it becomes a dual theme of sorts, as it does in "Stop!", or they can be one-shot quick-hits. Speaker John Fox created a belly laugh at a conference in June when he talked about black people taking over the world: (to paraphrase) 'There's Oprah, Tiger, Obama; even Michael Jackson was on top of the world when he was actually black! (Background clarification - John is black, and the speech was before Michael Jackson's death.)

Keep your audience in mind when you develop these, of course. Dropping a Rat Pack reference to a group of high schoolers, or joking about Kanye West's recent VMA interruption to a senior center, may not be your most effective choices!

In using this approach, avoid stretching too far to achieve it, or using a reference you're not familiar with. Nothing hurts your credibility as much as attributing a catch phrase to the wrong movie, or taking something out of context that can throw your audience off. (Example: "I felt like Moses when he built the Ark!" - funny if intentional, confusing if unintentional)

When used correctly, the Catchy Cultural Reference adds a new dimension to your message, and builds memorability in for your audience. And it lets them know they can, wait for it.....Go Ahead and Laugh!

I'll be posting a humor method from "Go Ahead and Laugh" for the next five weeks - be on the look out to keep your audiences laughing!
Posted by Rich Hopkins at 8:22 AM
Email ThisBlogThis!Share to TwitterShare to FacebookShare to Pinterest