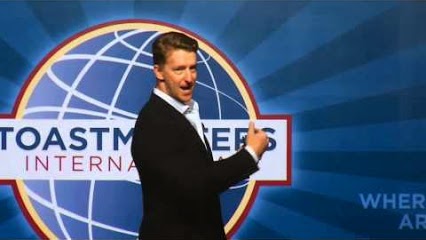 The first time I became acquainted with Douglas Kruger was on DVD - he was speaking in the Toastmasters World Championship of Public Speaking. He was extremely young, extremely thin, and had an extremely, exquisitely deep voice that anyone short of James Earl Jones would envy.

That was in 2004. 10 years later, I finally had the chance to meet him, even share dinner with him - just a few weeks ago in Kuala Lumpur. He was older (obviously), no longer thin (instead, packed with muscles that had muscles), but still with that amazing voice. Instead of being a contestant, hey was a mainstage speaker at the Toastmasters Int'l Convention, simultaneously an advocate and graduate from the program, who is one of Top Speakers in South Africa.

He's had a few other products created, but the first I've gotten my hands on is his latest book, on which his speech that week was based: 'Own Your Industry: How to Position Yourself as an Expert.'

It's built around the premise that we can each stand out on our own in some way in our businesses, as an expert, even in today's expert-heavy world, as long as we find a way to position ourselves, essentially, as OURSELVES, in a meaningful way.

The long-term benefit? He describes it with his 'Pie Man' parable - do you want to be the person tapping individual shoulders to sell your pie, or be so well known for your pies that people come to you?

The book spends a little time upfront building us up, helping us see a vision for ourselves, before getting to the nitty-gritty - 50 different strategies, some that work on their own, others that should be used in concert with others, described in 50 two to three page chapters, each with it's own pithy example or anecdote, and it's own question to the reader.

Some of my favorites include:

Now, I'll be honest, I've been in marketing, advertising, and speaking for a LONG time - and I can't say I wasn't familiar with a lot of what's in this book. He did manage to surprise me in a couple of spots, and, more importantly, inspired me to start acting on what I do know - which is most of the battle anyway for us as speakers.

If you're not a self-marketing guru, this is definitely the book for you. For those who think you've got it all figured out, pick this one up anyway, if only to hear what you know from a fresh and humorous perspective. If you're already doing all 50 of his suggestions effectively, well, you're either not reading this blog, or the money you spend on 'Own Your Industry' is less than you leave in your couch cushions.

Five Stars out of Five - and I'm looking forward to his next one - 'Relentlessly Relevant'.

By the way, if you've got a spare 45 minutes - check out this keynote on 'How to become an Iconic Speaker' - he knocks it out of the park.


Posted by Rich Hopkins at 11:27 AM
Email ThisBlogThis!Share to TwitterShare to FacebookShare to Pinterest