Jim Rohn - In the Speak & Deliver Hall of Fame 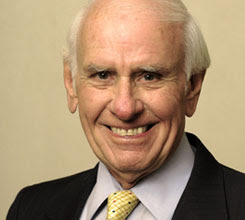 I remember the first time I heard Jim Rohn speak. It was an audio .mp3 I'd found somewhere on the web, and he talked about how to avoid becoming broke and stupid. I'd looked him up because Tony Robbins mentioned he was an inspiration for him in his life, and I believed it was important to drive backwards in order to go forwards. Little did I know I'd end up going backwards thousands of years as I kept finding the inspirations for the inspirers.

Listening to his voice, I heard a grandfatherly tone, authoritative, caring, with a healthy dose of sarcasm tossed in. He seemed like the ultimate ObviousMan, and yet I never felt like he was rubbing it my face.

He found power in the pause, giving us a chance to catch up with him, while at the same time leaving us anxious for the payoff.

His talks focused on his audiences needs, even when he talked about his own experiences, as every good speaker should. He always gave us something to do, to aspire toward.

Watching his videos (I never had the privilege of seeing him in person), he dressed impeccably, refused to run around the stage, jump on chairs, and always maintained a dignified stage presence. He would often stand behind a lecturn, or casually walk across the stage.

While he was a bit physically unenergetic on stage, his use of language and humor more than made up for it. He knew how to deliver a punchline as well as any comic, while maintaining complete decorum.

He gave continual praise to others in his life, including Earl Shoaff, who was to him what he was to Robbins. Like many speakers of his time, he was never afraid to reference the Bible, but never forced it upon you as a moral standard - simply a standard of common sense.

Chances are, if it was worth saying, Jim Rohn said it at one time or another during his time on stage. More than once I'd have a brilliant idea for a speech, a turn of phrase, and then, months or years later, hear him say it 30 years ago. Nothing more irritating than watching someone in a wide, loud, 70's tie steal my lines from the past. Irritating...yet inspiring to think I may actually have been on to something.

If you don't know Jim Rohn, you should. He'll not only change your life, he'll change the way you Speak & Deliver.

Posted by Rich Hopkins at 10:16 PM
Email ThisBlogThis!Share to TwitterShare to FacebookShare to Pinterest