Toastmasters Friday: Ready At Any Moment! 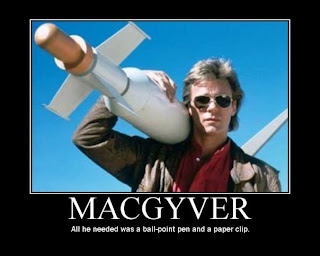 I was the Toastmaster for my Spokane Falls club last night. As it turns out, I had to become MacGyver.

I had made the calls, and figured I'd have one speaker and one evaluator for sure, half what I like to have, but about par for the course for this small club during the Christmas season. As various people showed up, it became evident that my General Evaluator and Speaking Evaluator were not going to show. This wasn't so bad, I guess, since my speaker didn't show up either.

A sure sign of disaster, right? Especially with 2 guests walking through the door to see what Toastmasters is all about.

By the end of the meeting, however, we had two speeches, two evaluations, and two impressed guests. How? By being ready at any moment.


1) I showed up early enough to the meeting to handle changes.
2) One Toastmaster I'd spoken to earlier in the week came with a pocket speech, just in case. Not just any pocket speech, by the way. She had a visual aid and handouts! Big pockets.
3) The Toastmaster who cancelled out of speaking showed up anyway, still determined not to speak. As I spoke with him, I was able to cajole him to give an impromptu speech about all the things he'd been doing instead of working on the speech he intended to give. It provided for an interesting speech!
4. I took over the General Evaluator role, in addition to Toastmaster.
5. My Timer took on an Evaluator role, with the Table Topic Master taking over timing duties during evaluations. The Grammarian/Ah Counter added the Evaluator to his duties.
6. The Table Topics Master did show, and did a great job involving every one who attended with a question.

We had a total of 6 Toastmasters, and because all were ready at any moment, we had a strong meeting that represented Toastmasters well, and encouraged the newcomers.

In addition, it exhibited the strength of the Toastmasters program, by putting people in impromptu situations where they were able to shine. How many times do you end up in a situation where you have to speak unexpectedly? Even the best platform speakers can find themselves fumbling for words when they weren't mentally prepared to speak. Using Toastmasters as a practice field for your impromptu speaking skills is a fun and inexpensive way to stay sharp.

Whether you're a Toastmaster or not, if you're a speaker, you'll find yourself in this position often. Your reputation will precede you, and you'll be asked to fill in for a toast, a prayer, a business presentation, who knows? Being prepared to be unprepared is the burden of being a speaker, so you may as well embrace it! The behind you save may well be your own.

Carry your pen and paper clip, and be ready at any moment - to Speak & Deliver!
Posted by Rich Hopkins at 2:11 PM
Email ThisBlogThis!Share to TwitterShare to FacebookShare to Pinterest