Do You Have Shut-Up Syndrome?

Better late than never. I am clearly a latecomer when it comes to "The King's Speech", both by speaking coach blogger and Oscar nominator standards. I finally caught the movie last week - an early showing at 10:30 in the morning. Popcorn is still good before noon.

My purpose today is not to write a review - for that I'll let you head to my favorite reviewer instead. Suffice it to say I enjoyed it tremendously - and if you are a speaker, you most likely will as well.

The film's plot centers around Prince Albert, who later becomes King George VI, and his inability to speak without stammering. The opening scene was enough to evoke tears from this viewer, as Albert faced a live audience in Wembley Stadium, his stammer more pronounced with each fear-delivered word.

While the film implies Prince Albert employs many speech therapists over the years, he makes no progress. Finally, his wife brings him to Lionel Logue, who is considered to be 'unorthodox' in his methods. Mr. Logue's approach is more psychological than mechanical. Prince Albert's unwillingness to be open with his life and feelings creates the push and pull of the plot, as we watch the two men dance around the truth that Mr. Logue has instinctively surmised within minutes of working with Albert.

It is a simple truth. A truth that is the foundation of the grand fear of public speaking in nearly all of us. A truth that, despite its simplicity, is often the most complicated to identify and overcome.

Here's the truth. At some point in our lives, often many, many points, we are told to SHUT UP. That we and our ideas and thoughts don't matter. Parents, teachers, nannies, classmates, coaches, bosses, heck, sometimes it can just be your little sister, all tell us to SHUT UP, planting a seed in our minds that we don't have a say about the situation at hand, and often, about our lives in general. 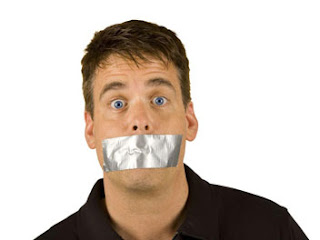 I call it Shut-Up Syndrome. We all go through it, but we don't all deal with it in the same way. How is it affecting you? Consider the following:

- What was your Shut Up to Speak Up ratio? In most cases, the world alternates its discouraging/encouraging ways. Generally, we are told by the same people who tell us to Shut Up to succeed and Speak Up, as well! Those who do successfully Speak Up, and experience various victories in their lives, often have a much reduced fear of public speaking. Those of us who end up stumbling are often bypassed for the next person in line, leaving us licking our wounds as we leave our self-esteem on the ground behind us.

- Do you fear specific audiences? Some of us would rather speak to a large room than a small group. Some can speak well at church but are terrified at work. There are those who can be eloquent anywhere but at the holiday family dinner table. While success can breed success, it is in our nature to slip back in comfortable roles in uncomfortable situations, to avoid the Shut Up feeling.

- Do you feel you have nothing worth saying? This is a common effect of Shut-Up Syndrome. We feel everyone else's thoughts have more value than our own. This attacks in two ways. First, we stay in the background, never speaking up, and hide in being 'the quiet one'. Second, when we are put in a position to speak, we panic, and worry that the audience will realize that our ideas really DON'T matter, right in the middle of the speech. We envision being interrupted, audiences ignoring us or walking out, and possibly throwing produce. (While this may not be helpful in this post, rest assured the preceding happens even when we do believe our message matters. Except for flying produce. Usually.)


As the King's Speech progresses, Mr. Logue slowly works to convince Prince Albert to give himself permission - permission to think his thoughts, permission to speak, and even permission to be King. While the movie playfully depicts the mechanical aspects of coaching that occur, from tongue-twisters to singing and swearing your way through speaking, it is this psychological piece that is so often overlooked by today's coaches.

Great speaking doesn't start with what you say or how you say it, but your willingness to give yourself permission to say it in the first place.

Only you can turn on the permission switch. There are people out there who may help you find it, but only you can actually power it on, and send enough voltage through your psyche to send Shut-Up Syndrome screaming out of your personality.

Without going into full coaching mode, let me leave you with this: Out of the nearly 7 billion people on the planet, only you have lived your life. Just as we learn from hearing others' experiences, others will learn from yours, if you are willing to share it. There will always be those who wish we'd Shut Up, and even now they may tell us to do so. But there are so many more who need to hear what you have to say, as only you can say it.

Speak & Deliver today. If your audience throws produce, make a salad. Keep speaking anyway - you deserve to be heard, and we deserve to hear you.

Posted by Rich Hopkins at 9:53 AM
Email ThisBlogThis!Share to TwitterShare to FacebookShare to Pinterest