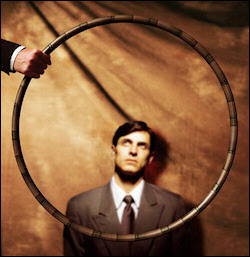 In Part I of this series, I talked about how to get Group Response. Today I'll discuss Inter-Audience Interaction, and tomorrow Questions & Answers.

What is Inter-Audience Interaction? It runs on many levels. Perhaps you want your audience to find out more about the people around them. You may have an exercise that necessitates pairing with the person next to them for a minute or two. You may be giving an all-day training session, and expecting the audience to break into groups.

Regardless of the level of interaction, consider the following before attempting to put your audience through circus hoops.

1. Familiarity Breeds Resistance. Believe it or not, the less your audience knows each other, the more success you will find in getting them to work together well. Knowing that they will likely never see each other again lets them release their inhibitions and start to show off a bit.

When you have a corporate audience that feels they have reputations and egos at stake, they are more likely to resist, and resist together, feeling they have some semblance of unity to battle your requests. Its not that outright, usually, its more of an undercurrent of resistance you need to break through.

2. They Have to Like You (or Fear You). If you're the big boss, they'll likely do what you say regardless. Even then, you're better off getting them to like you rather than fear you. Build your connection and create a positive atmosphere before expecting them to effectively interact. Either get them laughing, or get them sharing a common vision. Both will put them in an appropriate mood to do what you ask, and get something out of it.

3. Start Small. Asking an audience to move a giant boulder in the first few minutes of your presentation will be met with resistance - but if you get them moving pebbles to begin with, their belief in you, in themselves, and the process will grow to meet your eventual goal. In other words, getting them to meet the person next to them should be a precursor to getting them to meet 10 strangers in the audience, or break into a group for an exercise.

4. Tell Them Why. You're screaming NO - I want them to come up with the WHY by themselves. That's fine - you don't always have to tell them the REAL why. But give them a reason to participate, a benefit or goal that gives them incentive to get off their tail-ends and get involved.

5. Respect Their Physical and Psychological Space. Too many of us have been subjected to stage commands insisting we encourage the person sitting next to us by telling them to "Go For It", or "You Matter", or *shudder* giving them backrubs or hugs. Audiences rarely get much out of this type of rah-rah, psuedo-psychological interaction other than an anxiousness for your presentation to end, or worse, a sense of creepiness about you and your presentation as a whole.. Superfluous and space-invading interaction requests need to be locked in the '80's, never to return. If your audience wants to hug each other, let it be their own idea idea, not yours!

6. Give Them Results. Whether you're getting them to work in pairs or small groups during the presentation, provide them a takeaway, a lesson that comes from their interaction. The result should be more tangible when you put them in groups. In addition to the exercise, get them to report back to the audience with their results, and encourage them to take notes. Creating this expectation will prevent groups from chatting their time away, and help them take away something of value from their time interacting with each other, instead of you.

As with any audience interaction, its success depends on you being effective from the stage. Your confidence will lead them to follow-through as you intend. When your audience successfully participates, they will create their own Ah-Ha moments that will stay with them long after you've flown home. That's when you know you've learned to Speak & Deliver
Posted by Rich Hopkins at 9:02 AM
Email ThisBlogThis!Share to TwitterShare to FacebookShare to Pinterest