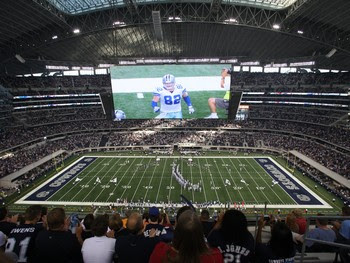 Imagine having open heart surgery, without any draping, on the 50 yard line of the Dallas Cowboys Stadium, in front of a packed house, with you on the big, BIG screen. That's what it was like for me watching the movie "Speak" last night. My innermost thoughts, my most personal life events, naked and open to the public. That's what happens when you let a camera crew follow you everywhere. 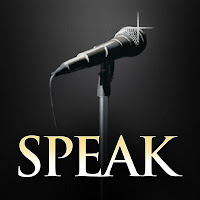 "Speak" is a documentary about public speaking from Paul Galicia and Brian Weidling and their company Tumbleweed Entertainment. As they researched their movie, they investigated Toastmasters, and then the World Championship of Public Speaking - and it was this event that they found to be the perfect setting to center their movie around. In 2008, they spent the summer interviewing the eight regional winners from around the country, and followed their journey to the Toastmasters International Convention, where they added the two inter-district winners to the mix.

I, of course, was one of those Finalists, representing District 15 and Region I (at that time, Utah, Idaho, British Columbia, Washington, Oregon, and Northern California) in the contest. The others were LaShunda Rundles, Colin William, Robert MacKenzie, Henry Flowers IV, Katherine Morrison, Loghandran Krishnasamy, Martin Presse, Charles Wilson, and Jock Elliott, who (spoiler alert) won the World Championship in 2011. For those of you looking for additional behind the scenes information, check out the free ebook we wrote together, "The Finalists", by signing up for my newsletter at RichHopkins.com.

After three and a half years of waiting, of hearing rumors and reviews of 'rough cut screenings', it was a tremendous weight off of me to have the actual movie (at least a 'screening copy', as the watermark said every so often on the video) on my TV for me to watch.

How do you 'review' a movie after you discover that you are one of the two primary storylines? What objectivity can exist as you watch a past version of yourself go through the experiences I did that summer? I honestly don't think I can. Below are some of my thoughts after a night to sleep on it:

1. The movie starts out focusing on the fear of public speaking, but quickly moves into the championship plot, and adds the 'find your voice' component. The two weave together well, and by the end of the film, their point is made.

2. It is clear that some hard cuts were made. How do you have a movie with 10 characters and give them all equal time? Everyone in the competition got screen time, but it was a 2-6-2 ratio - 2 had a bunch, 6 had enough to be satisfied, 2 were more cameos, but their time was still meaningful. I'll let you watch it for yourself to figure most of those out, but I bet you can figure out the two with the most screen time.

3. Great contributions from various Toastmasters, World Champions, and outside speaking professionals. Their spots worked well to transition from point to point.

4. The backstories on so many of the other contestants, from Robert MacKenzie to Charlie Wilson (and his wife!) to Martin Presse really showed the diversity of Toastmasters, and the different paths we can all take chasing after a similar, though hardly identical, destination.

5. Watching LaShunda Rundles journey both before and after the competition was fascinating and emotional. She lives the role of a heroine, and it comes through in this film.

As for me? My public open heart surgery? Well, to be honest, there were times I could hardly recognize myself. The movie truly shows where my mindset was at that time - a man desperate to turn things around financially, hoping to use the championship as a means to market a message that mattered. It shows my wife, and her unwavering support of my journey to chase my dream. It shows my honest emotions in the midst of my failure. It shows, in the end, the beginning of a mindset shift, from 'have to' to 'want to', from 'competition' to 'fun'.

It shows some strong qualities - passion, persistence, a dose of rebelliousness - that still reside within me, but are channeled in very different ways today. "Speak" happened before the medical issues with my family came up. While four members of family had Neurofibromatosis, the consequences of this genetic disorder had not been visible until the Spring of 2009. The potential blindness with Rachel. Later on, Braden's Scoliosis. Bailey's brain tumor. Now Kristi's leg tumor.

In 2008, I 'needed' to win. Today, my needs are quite different, my focus much clearer, and the paths to 'winning' quite different. Not that winning the World Championship wouldn't be fun, of course. The man in "Speak", I hope, has grown up - without losing his Passion and Persistence, but having built and expanded on those qualities with another than only sharpens with age - Perspective.

Hopefully, "Speak" will find its way to a theatre near you soon. Contact Tumbleweed if you want to arrange a screening. Most of you reading will know many of the cast. All of you, I believe, you'll find the movie eye-opening, entertaining, and uplifting. I did, and I didn't even bring home a trophy. But I did Win...Anyway.
Posted by Rich Hopkins at 9:35 AM
Email ThisBlogThis!Share to TwitterShare to FacebookShare to Pinterest