Book 2 of 52 in 52: The Attitude Check by Heath Suddleson 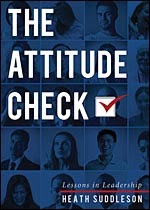 On my list of 52 Books in 52 Weeks, I half-jokingly suggested to the author of 'The Attitude Check', Heath Suddleson, that I'd review his book faster if he signed a copy and sent me one for free. Seemed only fair since he covertly recommended his own book for the list in the first place. So he contacted me again, got my address, and presto, over the last week I read his Lessons on Leadership - which I'd wanted to do for awhile now.

The book was so much smaller than I expected. All the pictures I've seen of it make it look like a Chicken Soup for the Soul-sized tome, and I figured it would take me a few weeks to digest. But at 5 x 7, as it is accurately advertised on Amazon, if I'd just looked closer, and only 120 or so pages, it is less a biblical text on leadership than a satisfying, anecdote-filled, read-on-the-airplane and walk off with some good ideas type of publication.

Heath gives us a good look at the need for leadership, and chunks it into two overall styles: Command & Control vs. Responsibility & Reward. His 'Attitude Check' works for either, asking us to decide what kind of leader we are, to identify our customers, and to realize the importance of our team to our value as a leader.

The Process
The book covers everything from building your team to motivating them to dealing with conflict, nonperformers, and dealing with lost production. He examines decision-making, owning mistakes, and even looks at the end game as the book closes, discussing how to groom your successor.

Some nuggets of wisdom I enjoyed included his explanation of 'organ rejection' within an organization, avoiding getting his toes stepped on by not putting them in the way of his team in the first place, and his use of visual reminders (in his case, a piece of clothing with USMC on it) to give him a 'subliminal Attitude Check' (my words, not his). Sometimes, it is important to remind ourselves who we are and what we expect from ourselves - to lead ourselves before we lead others.

The Heart
Heath shows three primary sides of his life to us, using them all as examples of his leadership prowess and the stumbles he had along the way to developing those skills. A Marine, a construction manager, and a Toastmaster who led the organization from the club level up to the International Board of Directors level. He notes the differences of those groups, from expectations to relationships to methods of results achievement. Suffice to say you can't expect a volunteer hoping to overcome their fear of public speaking to respond in the same manner as a disciplined fighting machine.

Most interesting to ME were his Toastmaster examples, of course, as I just kept trying to envision what he went through against my own experiences at much lower levels of the organization. I'm not sure if it encouraged me to actually move up into District Leadership or solidified my decision to wait another 20 years or so...

A concise and entertaining glimpse into Heath's life as a leader - essentially a weekend-long leadership seminar in a book. As a speaker, this book is perfect for him to sell in the back of the room, or sell ahead of time to organizations hiring him - as resources for their attendees. It isn't overwhelming to read, but it IS authentic, fairly comprehensive despite being brief, and almost always original enough to stand out amongst the thousands of other leadership books sitting on the shelves and the Amazon Wish Lists of the world.

I give The Attitude Check four stars out of five - I wish it had been longer - and that's more a compliment than anything else, I suppose. If you're looking for another perspective on leadership, or know some folks around you that could use one, or just want to send a copy to your local member of Congress, I fully endorse it.

(Speak & Deliver disclaimer: I am friends with Heath, though we've never met, and only talked on the phone once, about 3 1/2 years ago, while I ate a really big steak in downtown Omaha all by my sad self. We were talking Toastmasters, of course, and he was offering me his own well reasoned point of view on an issue being hotly debated at the time. As is the nature of such things, I have almost no idea what it was at this point. Suffice to say that he impressed me then, and impresses me now. My book review, however, is in no way influenced by this prior relationship. Probably.)
Posted by Rich Hopkins at 3:32 PM
Email ThisBlogThis!Share to TwitterShare to FacebookShare to Pinterest