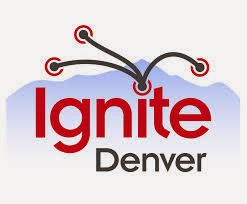 Have you heard of TEDtalks? Yeah, I thought so.

But, have you heard of Ignite? Not as many of you, I'm sure. Ignite is also a worldwide speaking platform, organized by local groups, which grew out of the first event in Seattle - apparently to give the 12th Man something to do when they aren't cheering on their Seahawks during the NFL season.

Five minutes, twenty slides is their schtick - short speeches tied to a slide show that advances every 15 seconds whether you're ready or not. When you're out of time - you're done. Sell from the stage and you're likely booed by the typically Generation Z audience. If you're boring, expect heckling.

Here's an example of a typical speech:

A real challenge, to be sure, especially for my pretty positive topic of 'Win Anyway'.

When I went to the Ignite preparation meeting to find out what I might be in for, I realized the audience wouldn't be my typical group of conservative professionals and Toastmasters - though many would be similar to actual members of my club. They encourage a contrarian approach, and even recommend swearing in an appropriate manner.

As seasoned a speaker as I am, working in this format is pretty foreign to me - which is exactly why I want to participate. So I've submitted my proposal, and all I have to do now finish in the top 15 or so vote-getters and I'll end up on stage at the Oriental Theatre in Denver in late February, and leaving with a pretty professional video of me in front of a large audience giving my core message. Not a bad deal, right?

So I'm asking you for your vote. I have no campaign promises, no special prizes - but I do promise to post the video here when it's ready! 'Win Anyway' is the second option in the voting list - but you have to vote for all of them - yes, no, and 'meh', essentially, for the vote to register. By the way, feel free to vote for the first one as well - it's a submission by my fellow club member, who accepted my challenge for our club to submit as many proposals to Ignite as we could.

Thank you, in advance, for helping give me yet another venue to Speak...& Deliver!

Posted by Rich Hopkins at 9:40 AM
Email ThisBlogThis!Share to TwitterShare to FacebookShare to Pinterest