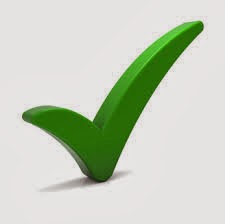 I've been a Toastmaster for almost 15 years. I've competed on the world stage. Twice. I've even been invited to keynote or speak in 13 different districts. Yet, my typical conversation when I meet Toastmasters outside of my district typically go like this:

Me: "Uh, no. I'm and Advanced Communicator Gold with an 'Old' Competent Leader Award"

Sigh. Lots of answers there. Too busy competing being primary among them. Tough to complete the District Leadership requirement when you're in 94 contests in a 10 year span.

Plus, the one year I took off in 2009-2010 to be a Division Governor, I took a job that took me out of town halfway through the term, and I never did most of the work. I still got credit for being a DivGov, but I didn't feel comfortable using that toward a DTM.

In truth, for a long time, I didn't really put a lot of value on a DTM. I was focused on winning the World Championship. That was my Moby Dick - and if you've seen SPEAK the movie, you know it was nearly my undoing. A DTM seemed like the ultimate accumulation of checklists. 40 manual speeches? Check. A few other bigger speeches? Check. CL manual? Check. Leadership role? Check! High Performance Leadership project? Check!

Yet - such a small percentage of Toastmasters become DTM's that it clearly is difficult to achieve. It takes time, effort, commitment - all qualities that don't always shine in the average human being.

Is the lack of quality control really a big deal? Or is it simply an extension of the activity-based, judgment-free atmosphere fostered by the organization? We have other awards that are judged - the WCPS, of course, and the Accredited Speaker. On the leadership-side, Board of Director spots are given only to those who HAVE been excellent leaders, and show strong credentials to the voters worldwide.

In 2011, after competing and not placing at the Semi-Finals in Las Vegas, I decided it was time to get out of competition for awhile. I announced in early 2012 my intention to be a 2012-2013 Area Governor, effectively killing my eligibility for the next two years. I changed my Moby Dick - so that I could finally answer the question "Are you a DTM?" with a "Yes - absolutely!"

My AG year was successful - we pulled off Distinguished with about 6 days to go. All I needed was my HPL - a GOOD HPL - one that would be worthy of DTM. At least worthy of what I wanted my DTM to represent. Thanks to the encouragement of several, the support of a great HPL team, and the inspiration from District 26's Lt. Governor of Education, Linda Rhea, the idea of ToastTalks was born.

ToastTalks was to be a Friday night event at the Fall Conference with Speakers either giving a 7 minute TED style talk, or a 5 minute, with 20 slides advancing every 15 seconds, IGNITE style talk. We wanted it emceed and video recorded. The event itself went off without a hitch, and the five speakers did a marvelous job of entertaining the 200 plus in the room. My team came through at every turn, and my HPL was completed two months later when I finally got back to my club, after traveling to Canada and dealing with Holiday events which kept me away, to give the wrap-up speech.

It wasn't the perfect HPL. I never got everyone together in person - schedules just wouldn't allow. Group email was my friend - and I asked them every question my manual demanded I ask, as if we were all in the same room. The timeline from start to finish was four weeks. But I learned a lot about my leadership style (or lack thereof) - and had to force myself to be more hands-off than I'm used to - to trust my team. In addition, I had to push myself in the background, as I was competing the next day in both contests, and any extra facetime by me would be unfair and potentially DQ me altogether. While it wasn't perfect, the final product was a grand success. 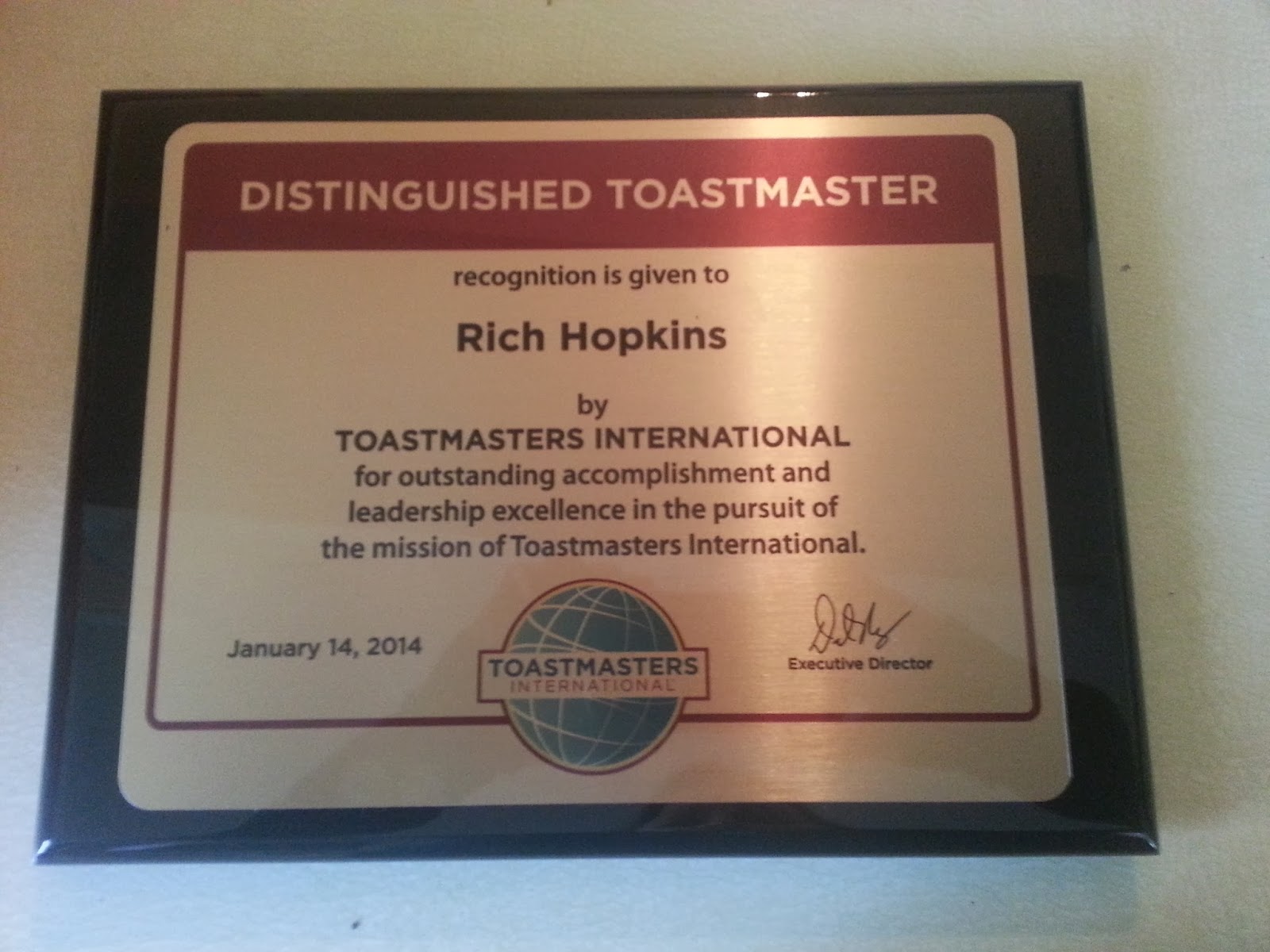 10 days ago, I was officially Rich Hopkins, DTM in TM's records. 7 days ago, I received the plaque in the mail. I'm proud of it - and even if it's just a series of checkmarks, they are checkmarks the average person never checks. And I didn't settle - by using the old Division Governor term, or using a project as an AG, like the Area Contest, which we have to do ANYWAY, for the HPL (not that there's anything wrong with that - though some thumb their noses at that practice), and I even made sure I earned the new Competent Leader award, even though I applied the old one to this award.

The DTM, much like Toastmasters itself, is what you want it to be, and you get out of it only what you want to get out of it. You can aim for quality or quantity. I suggest you go for both - and never let a checklist-oriented, judgment-free zone let you cheat yourself out of the best result you can get. Only you can decide what that is.

So my problem is solved. No more worries. I'll finally get my due respect. There's only one problem. I just know this is coming:

How 'bout right after I win the World Championship?
Posted by Rich Hopkins at 3:45 PM
Email ThisBlogThis!Share to TwitterShare to FacebookShare to Pinterest