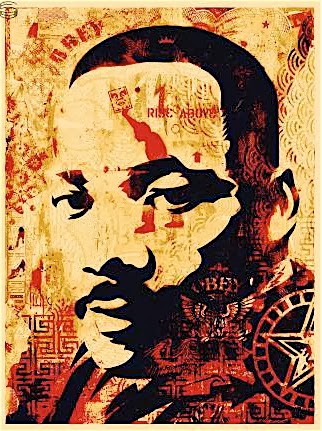 Every year, Martin Luther King Day rolls around, and I feel a responsibility to post SOMETHING. A responsibility I don't fulfill - I don't even do the minimum, say, posting a meme, a picture, or a YouTube video.

Even a search of my blog for MLK shows only a couple of posts mentioning him - two about misquotes, and one regarding the analysis of his speech in Nancy Duarte's Resonate.

Lets face it - what am I supposed to say? He was a great man, though, like all of us, he had his foibles, depending on which interviews and biographies you read. His impact on the world is undeniable, his vision for freedom and his method for achieving it above reproach. But you don't need me to affirm that for you.

His death was tragic, though hardly unexpected, especially by King himself. I hesitate to say he accomplished even more through his death than he could have in life - it's an easy cop-out. When one considers what Nelson Mandela was able to accomplish with all of his extra years, one can only imagine what King's results would have been.

As a speaker - after all, this is a speaking blog - again, what am I to say? He wasn't a speaker as most of us consider them today. He was an orator. A grand mix of preacher, politician and poet. A charismatic presenter with an audience who desperately needed him, both his following, and his enemies. His ability to move his listeners both emotionally and rationally, to change the thoughts of so many from what they'd been brought up to believe, to rally people of all types to a greater cause, may not only be unequaled since, but impossible to equal in the future.

He was the right man, at the right time, with the right message, and the right delivery - and he embraced it.

So many aspiring and emerging speakers stop themselves with fear of not being good enough, not being well-received. But how many of us fear DEATH or IMPRISONMENT when we speak?

But again, do you really need ME to say any of this?

How am I to truly understand who Martin Luther King was or what he did? I was a baby when he was assassinated. I'm was a white, middle class kid who at 6 and 7 years old played with other white middle class kids chasing each other around with a 'nigger stick' - though we (or at least I) didn't have a clue what that meant, at least until a parent heard us and thankfully stepped in. They didn't exactly explain it, though, just made us stop.

I grew up having one friend in my Iowa high school who was black (sadly, even as I type this, I don't know if I should actually type 'brown' or 'African-American' instead, or perhaps something else altogether), and we got along great. Of course we did - we both loved drawing and comic books and movies.

In my small Christian College in Oklahoma, diversity wasn't extraordinarily apparent, beyond the athletic department. Still, there was a young lady I asked out once after we'd been flirtatious friends awhile. She turned me down, saying I had no idea the obstacles we'd face if we started dating. I persisted, saying, of course, that I could handle whatever came our way, but she'd have none of it.

I thought for a minute as I wrote this post: "Do I have any black friends today?" My immediate answer was NO - but then, they started to pop into my brain. I have many, just as I have many friends of all races, creeds, and cultural origin. I just don't think of them in those terms, unless I force myself to. That, I would hope, would be one of the many desired results MLK had in mind 45 years ago.

There is no way for me to fully comprehend the legacy of Martin Luther King. I can never truly walk a mile in his shoes, or the shoes of those he worked to bring greater freedom and equality to - any more than I can understand what it's like to be a woman, an Asian, a Hispanic, a tall person, a bald person, a musical prodigy or a mathematical genius.

I can only wonder who I might be, who America might be (much less the world) - what prejudices and injustices we would support - if Martin Luther King had not chosen to Speak & Deliver. To stand up for what he believed in, to stand up for what was right and is right and should have always been right. There are more battles, new battles, and even some of the same battles, being fought today. He was called to speak for his values and his people - and by 'his people', I mean the people of the world - because that's what he wanted to create. A world not separated by color or class or politics or religion. But again - did you need me to tell you that?

I can only hope that I and my actions and the family I'm raising up will fall on the right side side of the Dream. That I continue to stand up and speak for what I believe, knowing I live in a much safer world, and have a much safer agenda, than he did. And that I can, perhaps, inspire and instruct YOU to do the same.

Posted by Rich Hopkins at 10:37 AM
Email ThisBlogThis!Share to TwitterShare to FacebookShare to Pinterest